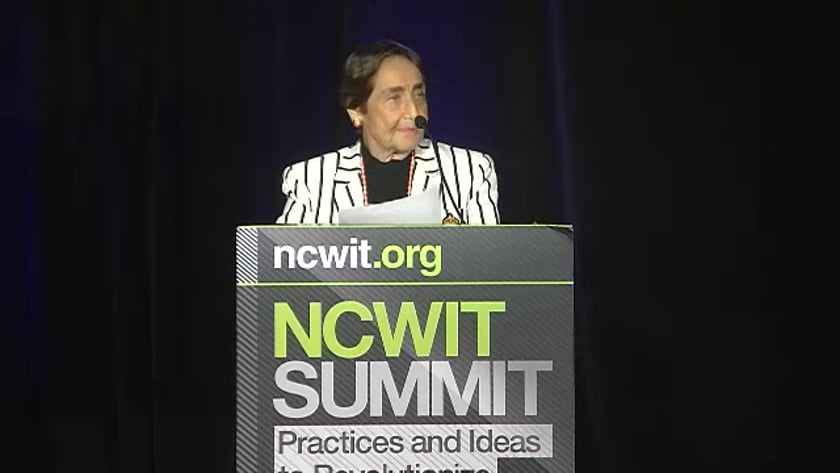 LUCY SANDERS: All right, so I’m gonna turn the floor over to Telle Whitney our co-founder. This is the first time you’ve taken the stage, so she is going to transition to one of my favorite sections of this meeting, the Pioneer Award. Thank you, Telle. [audience applauds]

TELLE WHITNEY: Lucy. Well one, two, three. Okay, Lucy asked me to start by talking about my remembrance and I had just taken over at the Anita Borg Institute when I got this call from Bobby Schnabel and I first met with Lucy and Bobby. And I was passionate in my support of women being at the table creating technology. And I knew at the time that this was gonna take a lot of people being involved. This new idea of having a center at the University of Colorado Boulder could reach academic audiences in particular that I knew that we couldn’t reach. What was most exciting to me were the early meetings starting with Bobby and Lucy. I remember thinking about the hubs. We always knew that the alliances was where the strength and the impact was going to come, but you had to start somewhere. And by having these hubs we could ask these incredible organizations, CRA, ACM, UC Irvine, the Girl Scouts, to come with us and figure this out. So it’s amazing to see the change. But that’s not really why I’m here, I’m here to introduce the Pioneer Award. In 2012 NCWIT created the Pioneer Award. This award goes to individuals whose contributions have changed the computing discipline. We are looking for lifetime achievements. The women honored by the NCWIT Pioneer Award helped invent the computing discipline and they forged a trail to all of us. Ah, I can’t read this, this is small. [laughs] [audience laughs] Who have entered and created the incredible discipline that we see today. So now I’m gonna ask Priscilla Rodriquez, who’s a winner of the Aspirations in Computing Award and is also now a student at the University of Southern California studying computer science, to join me on the stage. [audience applauds] And now it’s my great pleasure to introduce the winner of this year’s award. We are honored to present Eleanor Kolchin the 2014 Pioneer Award. Eleanor Kolchin graduated from Brooklyn College in 1947 with a bachelors degree in mathematics. After a short period of teaching math at the high school level, she was hired by IBM in 1947. And eventually became the tabulating supervisor of the computing staff at IBM’s Watson Center at Columbia University. While working at the lab, she was also able to attend classes towards the masters degree in math at Columbia. One of Eleanor’s first assignments was computing the orbits of a number of asteroids. After Eleanor left IBM to raise a family, she worked for many years solving various differential equations and doing Fortran programming. She was subsequently hired by NYU where one of her many jobs was a consultant to researchers using Fortran programming. Eventually she ended up developing the webpages for various NYU projects. She retired from NYU in 2006. And so it’s my great pleasure to introduce Eleanor Kolchin. [audience applauds] [upbeat music] [audience applauds]

PRISCILLA RODRIGUEZ: For you to remember this day.