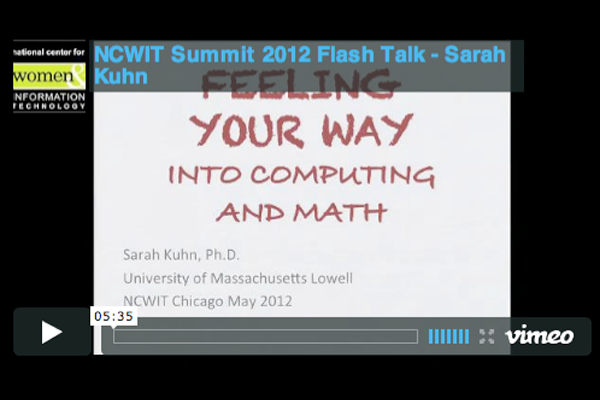 JEFFREY FORBES: Our next speaker is Dr. Sarah Kuhn. A member of NCWIT’s Social Science Advisory Board, a professor in the University of Massachusetts Lowell Department of Psychology, and a Faculty Associate at the Center for Women and Work to tell us about feeling your way into computing and math.

SARAH KUHN: Thank you. A year ago, I met an object that changed my life. It’s called a crocheted hyperbolic plane. A hyperbolic plane is a mathematical object and a crocheted hyperbolic plane is a model of that object made with yarn. In geometric terms, it’s a surface of constant negative curvature. Kind of the opposite of a sphere. If that’s confusing to you, don’t worry, because until some time in the 19th century, mathematicians thought that this was an impossible object. But then, finally, some proofs and some paper models later, they became convinced that there was really something here. But my life didn’t change until the late 90s, when Daina Taimiða, a mathematician, made a crocheted hyperbolic plane using the skills that she had grown up with as a girl in Latvia. Now, my life is all about hyperbolic crochet. [Audience Laughter] And everything, all the images that you see of crocheted hyperbolic planes in this talk were made by me. And while I’m crocheting, I’m saying, why didn’t anybody ever tell me that math could be like this? Here’s how I make a crocheted hyperbolic plane, I use a single crochet stitch, I work my way around in a spiral pattern, ever larger. Here are four stages in the creation of the plane. The crucial thing is that every so often, at a regular interval, I increase, I make two stitches in the same location, and it changes from a flat disc to something curvy. Now, it’s so ironic that I’m standing here, talking to you about math. I’m one of those people who hated math all the way through my schooling, including graduate school. I don’t know if you can see the tear stains on my fourth grade math homework, but I assure you that they are there. Now, suddenly I feel as if I have a relationship to math, and it’s one that’s full of ideas but also full of emotion and healing and passion. Let me talk a little bit about the ideas. The first idea is actually from computing, so most of you are probably familiar with this. Here’s my attempt to write a procedure to [Audience Laughter] make a hyperbolic plane. OK, it’s an algorithm. Another idea comes from systems theory, it’s the idea of emergence. The idea that a lot of little units or actions can create something larger and complex that’s very unlike the individual elements. Examples are a flock of birds, a coral reef, the growth of cities… You get the idea, or you don’t, talk to me later. [Audience Laughter] Anyway, I say crocheted hyperbolic planes as an example, also, of emergence, because you could see how they change as you make them. And it’s one simple stitch that propagates into this thing that I find very beautiful. Now people had told me that mathematics was beautiful, but that was never my experience. And all of a sudden I feel as if I can see, wow, there’s no arithmetic here to be done. Gender, of course. Crochet, at the moment, in our culture, is gendered female. Mathematics, still in many places, is gendered male. And that’s why I love the intersection of these two things. We’ve done a small research project at my university this semester that showed that women who listen to a lecture on non-Euclidian geometry while holding a crocheted hyperbolic plane, experience a decrease in math anxiety and an increased willingness to go on in math. [Audience Laughter] Yeah, it’s funny, but it’s awesome! [Laughter] So comfort and touch are also amazing things, our sense of touch is very important to our feeling of comfort in the world, but also to our understanding of three dimensional objects. So there’s a lot here to learn. I am convinced, and I hope now, after five minutes, you are too, that hyperbolic crochet can change the world. [Audience Laughter And Applause] Let’s do it.