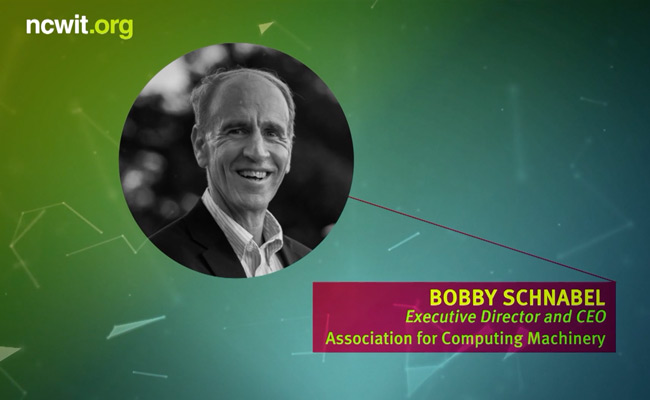 BOBBY SCHNABEL: And welcome back, both to all of you and to our livestream audience. So, the bad news is, for those of you who actually check things out like this in the program, I am not Jeff Forbes. The good news is that Jeff is right there and he will be moderating the rest of the morning. What I have is the great privilege of presenting the NCWIT Harrold and Notkin Research and Graduate Education Award, which is a mouthful. Now, for those of you who are really paying attention, you may notice that there’s a bit of a pattern here, which is that every time there’s a memorial award, I guess I forgot to actually say that this honors the memory of two wonderful people who I’ll say a little bit more about, Mary Jean Harrold and David Notkin, two people who we lost way too soon. So, what I was about to say is that every time there’s a memorial award, I seem to be the person doing the presenting. And I’m starting to think that there might be some implicit bias thing going on here, because if you look at the three co-founders of NCWIT, I’m the oldest of the three, which was good 20 years ago, it’s not so good now. And so I think Lucy is just sitting there saying, “Okay, we’ve got another memorial award, we’ll have the old person do it.” Now, the other thing you may be thinking about is that, that’s not really an appropriate way to talk when you’re doing a memorial award. For those of you who knew Mary Jane and David, they’re up there watching us now, probably thinking two things. First, both being a little bit sheepish about being honored so much, and secondly, being quite glad that we’re having a little bit of a good time with it, so I don’t actually have any qualms about that part. But more seriously, this honors two people who made outstanding contributions in research, in mentoring of students, and in diversity. Mary Jane Harrold and David Notkin were both on the very initial tier of contributing to NCWIT, they had wonderful careers, and they were even better people, and I miss them both an awful lot. So it’s just wonderful that the NCWIT Board of Directors chose to fund this award to honor people, US university professors, who contribute in the ways that Mary Jane and David did to all of research graduate education and mentoring. And the reason the Board chose to do this is to also highlight the real importance that mentoring plays in the entire time of a student’s education. The award carries a certificate and also a $5,000 stipend. And I’m absolutely delighted that the recipient of this year’s award is Professor Jen Rexford of Princeton University. So Jen has had a career with a list of leadership accomplishments and honors that would take us too long to list, but includes election to the National Academy of Engineering, to the American Academy of Arts and Sciences, participation on the Computing Research Association Board, and on the Council of the Computing Community Consortium. She’s currently the Chair of the Princeton University Computer Science Department, and in my organization, ACM, among other things, she’s been the Chair of ACM Kick sitcom, she’s been elected an ACM fellow, was the recipient of the ACM Grace Murray Hopper Award, and this year is the recipient of the ACM Athena Award. She is the author of a book, Web Protocols and Practice, and of an innumerable, uncountable number of research papers. And in addition to having a career that has had amazing research accomplishments and leadership contributions, she has consistently been an outstanding mentor to graduate students, many of whom have gone on to accomplish great things. And I’m gonna read just from a statement that one of them, Joshua Rush, made, he wrote, “In addition to her incredible generosity and unique intelligence, Jen also stands out as an exemplary model of mentorship that is non-judgmental and focused on mentee well-being.” So please join me in congratulating Professor Jen Rexford. Congratulations, Jen.