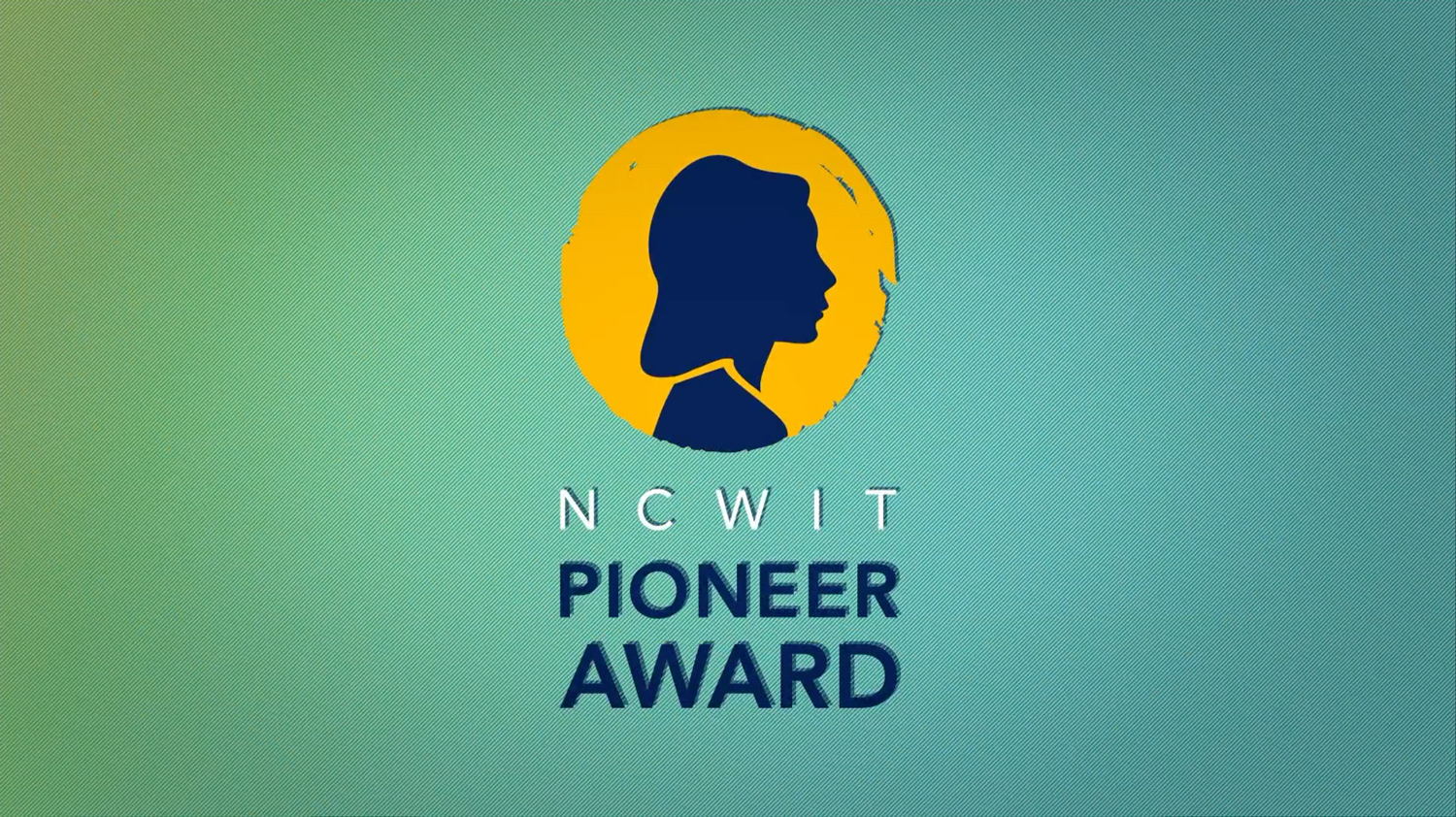 PAT RUSSO: And now, I’d like to turn the mic over to Susie Armstrong, who will present our final award for this afternoon, the NCWIT Pioneer Award. Susie? [applause]

SUSIE ARMSTRONG: I need the glasses. [laughs] So, good afternoon. In 2012, NCWIT created the Pioneer Award to recognize individuals whose lifetime contributions have changed the way we think about women’s participation in the fields of computing and technology. The woman honored today helped invent the computing discipline and forged a trail for all of us who have since entered computing or have since used any technology product or service. Dr. Cynthia Solomon’s focus has been on creating fun-filled, thoughtful, personally expressive, and aesthetically pleasing learning environment for children. In addition, she has contributed to research in human-computer interaction and children as designers. Her seminal book, Computer Environments for Children, was the first comprehensive reflection on computers and education and her paper with Seymour Papert, 20 Things to Do With A Computer, is a classic in it’s field. Her collaboration on Logo, with Seymour Papert and teams at BBNN, began in the late sixties and continued for the next four decades. Logo was the first programming language and the programming environment designed especially for children. It was also one of the earliest programming languages to be multilingual. In the course of building Logo and its successor, Learning Environment, Cynthia was a founder of Logo computer systems and directed the development of Apple Logo, the first commercial version of Logo. Her contributions have influenced computing environments through the research, writing, and teaching at the elementary, high school, and college levels. I also want to add a little off-script personal note. In 1982, I went to work for Xerox, for the spin-off from the Palo Alto research center that did the first personal computers, bitmap displays, ethernet, Windows. The programming languages environment at Xerox in those days was a real hot-bed of languages and environments and much of that work was actually informed by Cynthia’s work on Logo. So, I, you know, with Cedar, Smalltalk, Mesa, which I programmed in, a lot of the work on first personal computers was actually influenced by Cynthia. So, I actually believe that Dr. Solomon, you are my academic aunt. [laughs] So, it is with great pleasure and a great honor to welcome to the stage, Dr. Cynthia Solomon, the 2016 NCWIT Pioneer Award winner. [applause] [upbeat rock music]

DR. CYNTHIA SOLOMON: I almost fell down. Thank you. I am so honored to receive this award and I feel like I’m receiving the award, not just for me, but for women who haven’t been recognized. Who have been working hard to create new environments for children and haven’t always been funded or encouraged to pursue it anyway. I’m going to show you, oh, is it on? No. How do I? Sorry. Is this how it goes? Oh, there. [laughs] That’s a picture or pictures of the first all-year Logo class. These were 7th graders in 1968, ’69. Logo was already a year old, but we really had redesigned it a few times and there I am with Seymour Papert and what I wanted you to see is the children were working on Teletypes. I don’t know if you know what a Teletype is, [audience laughs] but the kids were very good. We had Model 33s and Model 35s and they preferred the 35s. [audience laughs] Now that year, what we were trying to do, Logo is considered a language which you could play with words and sentences and the projects that we engaged children with and that they came up with were having to do with list-processing generating random sentence generators, generating random algebraic sentences, but there was something missing and what was missing came about a year later. We started this project at a company called Veronica Newman, and after teaching these 7th graders, Seymour took me off, he was a professor at MIT, he took me off and we started the Logo group at MIT and a year later we had a display turtle, a floor turtle, a music box, and we had this display turtle, it was a big kludge, but that could be in the school and work over phone lines back to MIT, but the important thing is that the refresh rate and everything was great. So, that was, the reason that happened was because all of these hackers at the MIT AI Lab which the Logo group was part of were charged. Marvin Minsky made the music box. I could name some other people who are, you know, senior professors now at MIT who worked on the graphics and so on. It couldn’t have happened without that kind of teamwork and today Logo has in a way diminished and being replaced, somewhat, by block programming and there are these four different programming languages that are based on Logo, you can see it’s turtle graphics there, and this is the fourth one, which I think is Snap! or something and my favorite design is this, so I had to show it to you, but I think I was just a very fortunate person. I also had a commitment and an understanding of children. I could crawl into their heads and become children. I used to, in order to figure out what kinds of bugs they would run into, I sort of tied my hand, one hand behind my back, and I would rapidly write a procedure and bugs would appear and they were the kind of bugs that kids would run into and that kept me continually in and close to the projects. So the thing that we worked on was making computer culture, computer environment for kids and one where they felt successful, they were successful, they were creative. They were in charge and they also confronted hard bugs and, over and over again, I had the experience of kids being totally amazed that I didn’t know the answer either [audience laughs] and that together we could debug and I think that laid the groundwork and I hope it continues in a lot of places today in education and computing. It’s a little kind of de-nature, kids are, there can’t be two ways of doing something, only one. So, I’m hoping that those folks that do that will become more flexible because our future depends on these kids, these young people, being able to think outside the box. To face problems that seem unrelated, but are. They’ve been together, art and engineering and computing and thinking psychology and come up with new projects which we see all the time, those are the things that have been, being solved. So, thank you again. I’m very, very flattered. [applause] Thank you.

DR. CYNTHIA SOLOMON: Can you hold it? [laughs]

LUCY SANDERS: Can you tell what this is? It’s a bronzed pioneer bonnet. [applause]