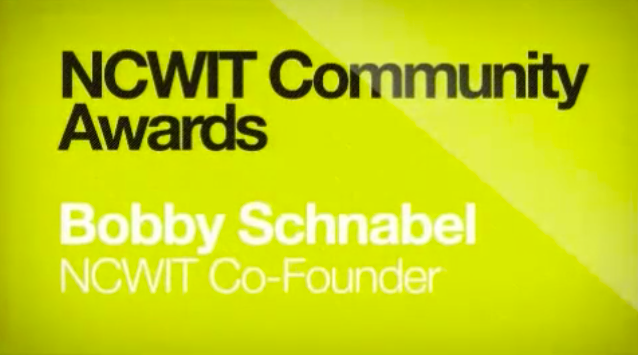 BOBBY SCHNABEL: Good morning! [indistinct chatter] And welcome back to the third day of the NCWIT Summit, thanks again to Turner Broadcasting for streaming this live and welcome to the people who are watching it live. By the way, in the neverending saga of this headset I’ve had people coming to me that they thought I was on oxygen… [audience laughs] But in fact the oxygen in the room is going to be supplied next by three great awards from the Academic Alliance. For the first one I’d like to ask Tommy Simpson and Maureen Doyle to come up here. You’ve seen them both before, Tommy is director in the AT&T’s information technology organization and heads the technology organization… Technology Development Program, sorry, and Maureen is an Associate Professor of Computer Science at Northern Kentucky University and she and Scott McCrickard have been responsible within the Academic Alliance for leading the selection. So, Tommy and Maureen! [applause]

MAUREEN DOYLE: Okay… The NCWIT Academic Alliance gives out four awards each year for faculty to recognize their work in undergraduate research mentoring. The award is given to people who have done outstanding mentorship with a diverse group of students, underrepresented groups and females. Their research projects are high quality research projects and their efforts to encourage and support undergraduate students to pursue a graduate education. So all of these award winners have excelled in that area. So I’m very happy and honored to announce the NCWIT 2014 Undergraduate Research Mentoring Awards. The first one – if you’ll please stand when I say your name for Senior Faculty at a Ph.D. granting institution is Dr. Marie desJardins, who’s not here today, from the University of Maryland, Baltimore County. Senior Faculty, the BS/MS granting institution is Dr. Robert Beck, and he is… [applause] He’s a professor from Villanova University. And then we have two in the Junior Faculty at the Ph.D. granting institution is Dr. Silvia Figueira, from Santa Clara University, if she will please stand… [applause] And Junior Faculty at a BS/MS granting institution is Dr. Alan Jamieson, Assistant Professor from St. Mary’s College of Maryland. If he will please stand. [applause] So, congratulations to all of the award winners and now I’d like to… There we go…introduce you to Bobby, from AT&T.

TOMMY SIMPSON: Hi,thanks! First I wanted to say thanks to Maureen and Scott who was mentioned, just for organizing and reviewing candidates and helping make this a possibility So, first let’s give them a round of applause and thank them [applause] and then I just wanted to thank the or congratulate the award winners again. I personally have three daughters and so, you know, this means something to me, and my daughter, who’s three, loves math, and so I do want to continue to see her and challenge her and encourage her to pursue a technical career, like I have myself. I thank everyone in the Academic Alliance, I thank for what you guys are doing, within the, you know, encouraging people to pursue technical careers and careers in computing and as part of that, I’m AT&T, again we’re proud to sponsor this award and we wanted to announce, you know, we are going to sponsor it again next year, so we wanna encourage everyone, within the Academic Alliance, you know, continue to nominate, continue to do great work out at your universities and look for the nominations, or look for the opportunity to nominate upcoming this August and encourage everyone to apply, and we will review the nomninees, and again make selections and award people again next year. So, thank you so much for this opportunity and with thay I’ll play it back to Bobby. Thank you! [applause]

BOBBY SCHNABEL: Congratulations to the award winners and thank you so much to AT&T for your support of this award. The next set of awards are the Academic Alliance Seed Fund Awards, and for that I’ll bring back up Rane Johnson-Stempson, who is the Education & Scholarly Communication Principal Research Director at Microsoft.

BOBBY SCHNABEL: Thanks, Rane and to Microsoft for your support! I had the privilege of getting to hear a little bit about each of those award projects and they are really diverse and great set of projects, so do check them out! The final award presentation is a very special one, and for that I have the privilege of calling up Ed Lazowska, who’s the Bill & Melinda Gates Chair of Computer Science and Engineering at the University of Washington. [applause] [applause]

ED LAZOWSKA: Well, thanks, it’s an honor to be here today! Our community lost two very special friends and members in the past year, Mary Jean Harrold and David Notkin. They have many things in common, both were outstanding researchers and mentors, both were leaders in our community’s effort to broaden participation, to recruit, encourage, promote and retain women and members of other underrepresented groups. Both were members of the Software Research Engineering Community, very successful members. Both were ACM and IEEE Fellows. Mary Jean Harrold was at a number of universities over her career, at the University of Pittsburgh, at Clemson, at the University of… at Ohio State University and at Georgia Tech, finally. David was my dear friend and colleague for nearly 30 years at the University of Washington. To recognize Mary Jean and David, and to encourage others to follow in their path, NCWIT this year created the Harrold and Notkin Research and Graduate Mentoring Award. So the goal is to recognize individuals with outstanding research contributions, with demonstrated excellence in mentoring graduate students and undergraduate students, and with a track record of advocacy for recruiting, encouraging and promoting women and members of underrepresented groups. Before recognizing the first recipient of the award I’d like you to join me in welcoming David Notkin’s wife and son, Cathy Tuttle and Akiva Notkin. Cathy and Akiva, could you stand, please? [applause] [applause] And I’d also like to aknowledge Mary Jean’s husband and other family members who couldn’t be here today, but who are watching the live stream. [applause] [applause] The first recipient of the Harrold and Notkin Research and Graduate Mentoring Award, by the way, we had a presentation at the Academic Alliance in the previous session, is Nancy Amato. Nancy, could I ask you to stand, please? [applause] [applause] So, Nancy is a professor at Texas A&M, she’s a leading researcher in robotic motion planning, she is a gifted graduate adviser, she’s a tireless advocate for women and minorities, and in every way exemplifies what this award is meant to commemorate. Let me ask, if I may, Nancy and Cathy and Akiva to join me on stage. [applause] [applause] [applause] Nancy, if you’d like to make a few remarks…

NANCY AMATO: Yes, first, it’s a tremendous honor to have received this award from among all the very many outstanding people that were qualified. It’s really humbling. And secondly, it’s particularly touching to me because both Mary Jean and David impacted me at critical times in my career. One of the things that I’ve done that’s been most rewarding to me was to run the Distributed Research, the DREU program or the Distributed Mentor Project, for CRA-W, and I took that over from Mary Jean and she actually trained me on how to do that. I still do that today and I remember going to Georgia Tech and learning from her. And then, another thing that I took on was to become co-chair of the NCWIT Academic Alliance. It was actually very difficult decision for me about whether or not I should do that and the thing that was kind of the turning point for that was I was in Seattle in the summer when I was trying to make the decision and I just contacted David and he said: “Come on over and we’ll talk about it.” We had scheduled an hour and I stayed for more than two hours with him in his office, discussing things. And when I was done, you know, I kinda had a way forward and knew that this was the right thing for me to do. So they both touched me in important times of my life. A huge honor to me. [applause] [applause]

ED LAZOWSKA: So Nancy has already received her plaque, but we have another award for her here…

MARY JEAN HARROLD: Hi! We have, as many of you know David, he was very much a tight-eyed kind of guy. [audience laughs] And so, we do have this tight-eyed shirt from Notkinfest, that we’re going to give to Nancy. I just wanted to say too that David could not have been prouder that to have this… to share this award that’s been given to Nancy. He loved his family, we have a daughter as well as a son. Because he died early, he never had the experience of having grandchildren, but he loved the fact that he had academic grandchildren, academic great-grandchildren and he loved his academic family. And I think that the work that you’re doing is tremendous and moving forward that idea of academia as family, and mentorship as the true kind of service of being an academic scholar. So thank you very much! [applause] [applause] [applause]

ED LAZOWSKA: Thanks! I do wanna note that this award is sponsored and will continue to be awarded by the NCWIT board of directors. So, Nancy, congratulations! This is just a wonderful way to comemmorate two of the leading figures in our field. Thanks very much! [applause] [applause]

BOBBY SCHNABEL: Thanks, Ed! This is clearly a bitter-sweet award to be giving, as you heard, both Mary Jean and David were pioneers within NCWIT as well as within our community, they were good personal friends of mine in both cases. We lost them both way too early, but it’s a wonderful way to be comemorating them, and Nancy is a very fitting first recipient of this award. So, thanks, and again congratulations to all the award winners, and now I have the great pleasure of asking NCWIT CEO, Lucy Sanders, to come up to introduce a very special guest. [applause] [applause]

LUCY SANDERS: Good morning, everybody! How are you?

LUCY SANDERS: Wooo! Okay, summit! Yaaay! [audience laughs] I am extremely excited to introduce our special guest, Chelsea Clinton. She’s the vice-chair of the Clinton Foundation and in that role she’s also very active with the Clinton Global Initiative and on their foundation’s health programs. The Clinton Global Initiative, if you don’t know, is an effort that convenes and mobilizes change leaders around the World to focus on the World’s most pressing problems, and she’s also an NBC special correspondent and recently graduated from Oxford University with her Ph.D! How about that? [audience cheers] [applause] [applause] I don’t know if we’re the first to welcome Dr. Chelsea Clinton to the stage, but we’re very excited about that! So, last summer I got a text message from Paula Stern, who was watching Chelsea talking about computer science and women, and the importance of women’s participation in computing and what it would bring to the World, and she sent me, texting me, right from the 2013 Women in the World Summit and at that moment in time we said: “Chelsea’s coming to our summit.”