Update from The Stern Group, Opening Doors in Washington, D.C.

NCWIT recognizes the importance of establishing a strong presence among legislators and policy-makers in Washington, D.C., and we strive to keep key decision-makers apprised of the issues surrounding diversity and innovation. We do this with the help of The Stern Group, an international advisory firm led by the Honorable Paula Stern. Here are some examples of The Stern Group’s work on behalf of NCWITover the course of the last month.
On January 7, 2010, Dr. Paula Stern of The Stern Group addressed the President’s Council of Advisors on Science and Technology Policy on behalf of NCWIT (view the webcast). Dr. Stern highlighted three major themes:  jobs, a shrinking talent pool, and education.  Specifically, she pointed out that there are IT-related job opportunities in the U.S. economy now and in the projected future.  She emphasized the need to attract and retain a diverse range of computing talent in order to keep pace with the growth of the information technology industry worldwide.
Furthermore, she spoke of the need to focus education and career counseling on information technology and not simply STEM (science, technology, engineering, and math). Finally, she stressed the importance of NCWIT’s mission, which is to promote rigorous, engaging, relevant computer science instruction that will attract underrepresented children and women re-entering the workforce in order to build a skilled U.S. information technology cadre.
On January 12, 2010, the Society of Women Engineers (SWE) hosted a Roundtable on Practical Approaches to Attracting and Retaining Women in Science, Technology, Engineering, and Mathematics (STEM) Fields at the National Academy of Sciences in Washington, D.C. Ms. Sarah Eversman attended as a representative for NCWIT.
The roundtable discussions included a session on “Congressional Perspectives” from Marcy Gallo, Ph.D, a representative from the House Science and Technology Committee, and legislative assistants on the behalf of Senator Edward Kaufman (D-DE), Representative Marcia Fudge (D-OH), and Representative Vernon Ehlers (R-MI).
Marcy Gallo noted that the House Science and Technology Committee is working at present on the reauthorization of the America Creating Opportunities to Meaningfully Promote Excellence in Technology, Education, and Science (COMPETES) Act with renewed support for STEM education. Senator Kaufman, who recently published a commentary in Education Week, “STEM Education: A Race to the Top,” is promoting the “Educate to Innovate” campaign that was initiated by President Obama to improve the participation and performance of America’s students in STEM. This campaign will include efforts not only from the Federal Government but also from leading companies, foundations, non-profits, and science and engineering societies to work with young people across America to excel in science and math. Finally, Rep.Vernon Ehlers recently authored a House Resolution designating December 6-12, 2010 as National Computer Science Education Week. “I introduced the resolution with my colleague Congressman Jared Polis (D-CO) designating Computer Science Education Week primarily to highlight the shortage of computer scientists in our nation,” said Ehlers. “Computer science is becoming increasingly important and relevant in today’s high-tech jobs, but fewer and fewer students are choosing this course of study. We can help reverse this trend by introducing students to computer science at an early age so they will be prepared for the jobs of the future.”
In another presentation titled, “Women and STEM: How Title IX Can Be a Tool,” Cathy Pieronek provided a general overview of the Title IX Law. She explained that although people tend to associate this piece of legislation with increases in federal funding for women’s collegiate athletics it also mandates certain obligations for colleges and universities receiving funding for STEM education and research. As such, the government could influence the climate for women and minorities in information technology and other STEM related fields by conducting frequent reviews of institutions receiving funding. Reviews, if regularly implemented, could provide a guide to understanding where in the educational process inequities do occur and where changes should occur.Pieronek emphasized the significant influence Title IX may have in helping “to identify aspects of an unfriendly academic climate that includes few role models to inspire younger women that passively (or in some cases actively) discourages women from participating.”
The Stern Group’s work to put diversity and innovation in IT in the federal government spotlight would not be possible without the support of people like you. Make a contribution today. You can read more about The Stern Group’s work in our D.C. newsletters.

(Thanks to Jane Butterfield, Sarah Eversman and Paula Stern at The Stern Group) 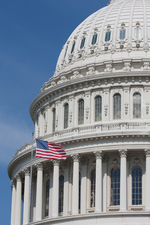