Earlier this month my husband and I packed up ourselves and our sons and headed off to Texas: first to Dallas, and then a long drive over to east Texas, where my folks live. We know what is in store for us — aside from seeing family, eating, playing cards, and shooting off fireworks — when we arrive: tech support.

Yes, this trip, like many we make to visit our family members, will involve fixing or updating or otherwise explaining their computing technology. It was hard enough when it was just the desktop hardware and software, but lately it’s been their networks as well. Don’t get me wrong: I love helping out family members. After all, they did educate me in computer science and they deserve all my attention in this matter. It’s just that I feel totally useless in the face of CD-ROM software bought at SAMS Club that is “slightly” incompatible with Microsoft Windows. Once, I saw my life rush before me as my mother presented us with a flat-screen monitor and asked us to hook it up to my father’s old PC … which houses his entire stamp collection catalogue, using software produced by his neighbor Bud decades ago.

You get the picture. We bravely take on every task, some with more success than others. This time, we were confronted with getting their recently installed DSL line to work correctly.

My folks live in a very remote part of Texas and have been fine using dial-up. But they heard our cries of anguish whenever we visited (we repeatedly harangued them about the lack of speed) and when DSL became available, they had a line installed. “It should pop right up”, the DSL guy said, and of course, it did not. My mother, a technically frisky octogenarian, drove to the nearest Best Buy and purchased an ethernet card. After installing it and hoping for the best, it still didn’t pop right up. Calls to the DSL guys didn’t turn up any help. That’s when we arrived.

Ever the technical sleuths (and painfully aware our reputations were on the line) we got one PC and one MAC and directly connected them to the DSL modem. Nada. “Call tech support,” I hear you saying, and that’s what we did. Since it was a holiday, however, the folks who had originally installed it were off and we were forwarded to a call center in Austin. After what seemed like hours of discussion, the agent pronounced our modem “old and discontinued” and couldn’t say why the local DSL folks had installed it. “It’s been recalled – get a new one”, says he.

So the next day, just as my folks had done before us, we drove to Best Buy and became the proud owners of a new DSL modem. This one was the exact type we were told to purchase. We took it home, plugged it in, and hoped … Zilch.

After much investigation we figured out how to talk to the modem, and it told us it wanted some secret key from the ISP that we didn’t have. Another call to the Austin based tech support yielded another surprise: my mom had no DSL account. “The local folks have not provisioned her account fully,” is what the agent regretfully told us. We have to wait until they return to the office the next day to really resolve this, he said.

The next morning, we had only until noon to resolve this problem and we didn’t want to leave town with our tails between our legs. So I called the local tech support bright and early. A nice woman asked me to tell her the entire story, which I did, and then she forwarded me to some other nice woman who asked me to tell her the story again … and then put me on hold. When she came back on the line, she said their tech guy would call me back.

He did. And can you guess his advice? Go back to the old modem (“I don’t know why Austin told you to replace it.”) So we put the old modem back and hook everything up and don’t you know? It popped right up. It was a miracle … or perhaps a feat of back-end account provisioning. Twelve hours of debugging and we now have happy parents and all is well. The DSL is not super fast, but it’s a heck of a lot better than dial-up.

I’m writing this in part because I know many of you also fill this tech-support role for your families and friends, so you sympathize; but also because I want to call attention to the digital divide that still exists in this country. We need to make sure that all of our citizens have easy — EASY — access to cheap and speedy broadband, even in remote parts of east Texas. A recent study by the ITIF puts the U.S. in 12th place in this regard globally, and that’s disgraceful. Ubiquitous bandwidth is a key component of innovation in today’s information age and without it, many of our citizens are being left behind.

Lucy Sanders is CEO and Co-founder of NCWIT, and she hopes you provide better tech support than she does. 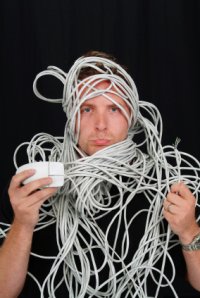