Science and Technology Education: Preparing and Inspiring America’s Next Generation

A panel of heavy hitters gathered earlier this week at the Brookings Institution in Washington, D.C. to focus on efforts to inspire and adequately prepare the next generation of scientists, mathematicians, engineers, inventors, and IT professionals.
The panel was moderated by Brookings Senior Fellow, E.J. Dionne, Jr. and included Robert Birgeneau, Chancellor of the University of California at Berkley; Susan Hockfield, President of the Massachusetts Institute of Technology; The Honorable Bart Gordon (D-TN), Chairman of the Committee on Science and Technology in the House of Representatives; and Brian Greene, Professor of Mathematics and Physics at Columbia University and Co-founder of the World Science Festival. The event was sponsored by Dr. James Simons, Founder of the Simons Foundation and Founder and Chairman of Math for America.
Dr. Simons told a crowded auditorium that our economy is increasingly dependent on scientific and mathematical capabilities, yet our students are not prepared for the jobs that require these capabilities.  This problem plagues not just the lower-end of the economic spectrum, but cuts across all income levels.  In order to rectify the inequities between the increasing number of jobs requiring mathematical, scientific, and technical training, Dr. Simons said that our nation’s teachers must inspire our students by thoroughly knowing what they teach and teaching what they love.  Too often individuals who would be excellent K-12 teachers in the STEM disciplines are drawn into the larger economy.
How do we convince these well-educated and passionate people to enter the STEM education field and remain as teachers when many school districts aren’t even aware that they have a problem?  Dr. Simons’ organization, Math for America, was established as a pilot program for a federal program to address just this question.  Changing the perception of teachers, math and science teachers in particular, is one step.  Adequately compensating teachers, especially our most successful teachers, is another.
Eric Lander, Co-Chair of the President’s Council of Advisers on Science and Technology and Founding Director of the Broad Institute at MIT and Harvard, presented a preview of the PCAST report released on September 16.  The report establishes that the single most important factor in preparing and inspiring students to pursue careers with science and technology is teachers.  Teachers need a deep knowledge of their subjects, but they also need to be inspiring instructors.  Lander recommended a National Teachers Corps to reward and recognize the nation’s best teachers.  This proposed National Teachers Corps is one way in which we can raise the status of America’s teachers.
Lander also encouraged the creation of more math, science, and technology focused schools like Stuyvesant High School in New York City and Thomas Jefferson High School for Science in Technology in Virginia.  We currently have about 100 of these innovative institutions around the country, but Lander and others believe we could use hundreds more.  At the graduate level, Lander commented that the number of PhDs in the STEM disciplines in the United States has remained constant, despite population increases, while the number of PhDs in China in the same disciplines has skyrocketed.
MIT President Susan Hockfield noted that while 85% of students at MIT graduate with engineering, math, and natural science degrees, across the country the percentage is only 15%.  Robert Birgeneau, Chancellor of the University of California at Berkley, commented that California has a large population of women and minorities who are not participating in the STEM areas.  Congressman Bart Gordon, Chairman of the House Science and Technology Committee, echoed this theme by saying that women and minorities, as the most underrepresented groups in the STEM areas, are the best way to provide a major bump for the STEM profession as a whole.  These groups offer the most promise in bridging the gap between the increasing number of jobs requiring scientific, mathematical, and technical competencies and the number of individuals prepared to assume these positions.
The panel ended by calling for action.  Congressman Bart Gordon encouraged individuals and their organizations to contact their representatives in the Senate and encourage them to vote for America COMPETES.  Columbia professor Dr. Brian Greene’s remarks left the audience feeling inspired about science and technology education and what needs to be done moving forward.  Greene emphasized the critical importance of teachers and the need to both change the perception of teachers and raise the compensation of teachers.  He said that the entire way we approach science education should be rethought: science is left wondrous by not explaining the big picture.  The emphasis on details and memorization that characterizes much K-12 science curriculum diminishes the fact that science is the most dramatic of stories.  If teachers who are passionate about science can in turn make their students passionate, the United States might just have the next generation of scientists at the ready to solve the next round of important mysteries and questions.

The Stern Group, an international advisory firm run by The Honorable Paula Stern, works on NCWIT’s behalf to establish a platform in D.C. circles and keep people apprised of the issues surrounding diversity and innovation. Read about NCWIT’s recent work in our Report from Washington, D.C. Newsletter. 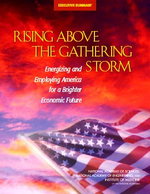