My Summer at Google

Ayesha Bose is a winner of the NCWIT Award for Aspirations in Computing and currently attends MIT. You can read more about her Google CSSI experience at her blog. 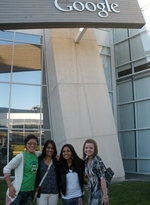