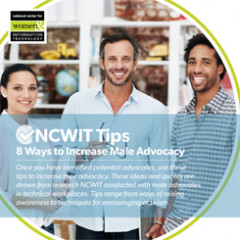 Once you have identified potential advocates, use these tips to increase their advocacy. These ideas and quotes are drawn from research NCWIT conducted with male advocates in technical workplaces. Tips range from ways of raising awareness to techniques for encouraging activism.

Attending majority female conferences or workshops was one example cited as eye-opening by several men in the study.

“I think the [Grace] Hopper Conference was a big, big jolt. When I stood up after an hour of it, I said, you know an hour ago I would have argued very strongly, differently, now I know nothing. I mean that was a revelation! Hopper was a big kick in the pants.”

2. Ensure that male employees have experiences with female mentors, bosses, or other female leaders.

Consider setting up formal or informal programs or rotational assignments that might encourage these kinds of pairings.

“I think every man needs to have a woman mentor once. Because that was very impactful on me — walking in to her office to sit down and have a conversation and seeing her there obviously dealing with something [sexist] that was going on, and she would tell me, and I would say, ‘What?!'”

Being educated about the issues, hearing from experts, and from technical women themselves can change men’s minds.

“We started reading some material in our diversity council, and it’s interesting this subconscious‑ness, that you tend to hire people like you. Not because you think the others are inferior or anything; it’s human nature, in a sense.”

4. Share “your story” of being a minority in a male‑dominated environment with male colleagues you trust.

The NCWIT study found that listening to women’s stories about their experiences was one of the most influential factors in motivating men to work for increased gender equity.

“When it finally started to hit me about gender diversity, we were in a big meeting and [my boss] made a comment about how difficult it was for her to be a leader in the organization as a woman. So here is someone who I literally was putting on a pedestal saying this. And I thought, ‘Wow!’ So I asked her after the meeting, ‘I want to go to lunch with you, I want to understand this!'”

5. Give male colleagues a specific role in gender diversity efforts.

Gender diversity is not a women’s issue. Many men would take more action if they knew what to do.

“What have I done? Well, I have joined on as a male advocate for the women’s organization at our site. We do have a role in the success of women; having male advocates is very important.”

6. Provide men with information to raise awareness and make change.

You could share NCWIT’s Top 10 Ways to be a Male Advocate brochure, give them the male advocates report, or show them the gender statistics in their department.

“I went to our internal database and looked at male, female. I just counted them. And then I said, ‘Well, is that good or bad?’ I had no reference point at the time, right? So then I went to a couple other organizations that have web pages for their [employees] and started counting too.”

7. Provide men with tools to use in gender diversity efforts.

Point to the recruiting, hiring, supervising, or retention practices described on the NCWIT website. Share accounts of ways other men held their employees accountable for diversity efforts, as described in the NCWIT Male Advocates report.

“We had goals, like 50% of all our hiring was diverse. We had some very strong, passionate leaders who had deeply held beliefs about how to do things.”

8. Bring men together who care about the issues.

Having other men to talk to about the issues and challenges can help men make more progress in their own individual efforts.

“I have brought [readings] in and shared them with some of my peer managers, especially ones that need a little help to understand. I’d say, ‘Let’s talk about the paper. What kinds of things did you learn from reading it?’ And now they have come to get used to [these ideas].”