In my role at NCWIT, I have wonderful opportunities to talk to people all over the United States about technology and innovation. As a technologist and innovator myself, I love this part of the job. September brought together several thought processes for me that I am only now finding the time to write about. All concern the impact of information technologies on our global, social, and economic systems, and the role that women must play.
In September, I was fortunate to receive a scholarship to the Aspen Institute’s Executive Seminar. The Executive Seminar experience enables participants to define and understand basic values that are at the heart of the most complex decisions leaders face, especially in the construct of our societal and economic institutions. With the mountains and gold-turning aspen leaves as our backdrop, I came together with other leaders from around the world to learn from each other and from some of the greatest thinkers of all time. As seminar participants, we examined the writings of philosophers such as Aristotle and Plato, social theorists such as Rousseau and John Locke, voices of conscience such as Martin Luther King, Jr. and Harriet Taylor Mill, and contemporary minds such as Francis Fukuyama. It was a “great books for corporate executives,” experience, as our moderator, Christopher Makins, noted.
There were some dynamite executives in this seminar and we had some very meaningful conversations, especially concerning women’s almost total lack of involvement — dare I say invisibility? — in the creation of the very systems that drive the global economy and our society at large. I could pull some quotes for you from our week of readings, but you’ll get the point with this one simple historical fact: women were viewed as incapable of holding property, conducting commerce, or participating in the creation of our civil liberties well into the 1900s — and beyond, some would say. Some would say we’ve come a long way, baby. We’ve evolved since then. However, I left the seminar pondering something further.
Information technology, as Thomas Friedman points out again and again, is not having a huge impact just on the global economy; it’s also affecting our social, economic, and civil institutions, with potential impacts not unlike our founders had to consider as they created our government and financial institutions hundreds of years ago. This time, however, we don’t have hundreds of years to figure things out: innovation and obsolescence happen at lightspeed, and information technology can literally change the world overnight. It changes who can compete in the global economy, it changes the nature of advocacy, it forces us to deal with privacy and piracy, it facilitates multi-national corporations, it allows communities to form with no proximity between members, it can reshape democracy … and on and on.
NCWIT is working to increase women’s meaningful participation in information technology for many reasons – for the innovation of the technology itself, for the economic strength of our nation and our corporations, for equity. But it’s imperative we don’t lose sight of the huge transformations occurring in the foundations of our civil, societal, and commercial foundations that are the result of information technology. Informed women were not at the table as these systems were evolving: they need to be, now.

Lucy Sanders is CEO and Co-founder of the National Center for Women & Information Technology (NCWIT). 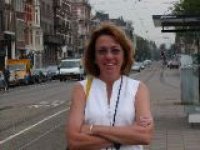