Girls and Math: What Works

I’ve been volunteering in the Boulder Valley School District for the past 15 years, working with students in the areas of math, science, and computers at the elementary, middle, and high school levels.
Four years ago, when my math enrichment groups were boys and girls together, the 3rd grade group was 40% girls and the 4th grade group was 30% girls. These were opt-in activities that students could choose to do. In 5th grade, however, students are ability-grouped and must test into their respective levels. At that time, only 20% of the 5th grade advanced math group was girls.
Since then, we’ve been conducting separate math enrichment groups for girls and boys. This year the 5th grade advanced math group was 50% girls. It’s just one data point, but it seems to fit with what other folks tell me the research is confirming: girls do better if they can have their own space, at least for a while. Obviously, separation can’t be permanent. But it seems that at least for some time it’s important.
I have these observations:

As early as 3rd grade, girls start opting out of involvement in math, science, and technology activities when they are in a co-ed environment. They stay involved if they have an environment separate from boys.
When you opt out of something long enough, you can’t very easily opt back in. If girls don’t stay involved in 3rd and 4th grade, they will be permanently behind by 5th grade.
Our perception is our reality. If we can’t “see” ourselves in a role, we won’t go there. I have heard too many young women deciding against a path into science or technology, and when asked for a reason, start the response with something like, “I can’t see myself as a …” The decision has very little to do with ability and a whole lot to do with self-image.
The only way to build a skill — whether it’s academic, athletic, or social — is by practice and repetition. Similarly, our perceptions get reinforced by the repetition of the role models before us. If girls don’t see “people like me” in science, math, and technology, they’re going to get the message that they don’t belong. Yes, there are women in industry and academia in those roles, but elementary school girls don’t see them. And besides, the statistics are still far from 50-50.
The media are more powerful than schools, parents, and teachers. The media stereotypes are all about men in leadership, men in science, men in technology, and women in support roles.
Girls need to see female role models in science and technology on a regular basis, not just the once-in-a-while events such as the GESET convention (which has great attendance) sponsored by SWE and others this spring. While these events are important and worthwhile, they are not sufficient.

What I think would be wonderful would be for women in local industry and at universities, who are involved in technical work and academics, to spend time regularly with girls, starting in elementary school. It’s a commitment, no doubt. It may not seem glamorous, nor the type of activity that garners media attention, and it’s probably not the stuff of NSF grants. But I believe it will pay off for the bottom line: more women in science and technology. And if my experience is any kind of example, spending time working with kids on a regular basis is a reward in itself that is unmatched.

Fred Gluck was formerly a software developer and manager at Bell Labs, and for the past 15 years has logged numerous hours as a volunteer for Boulder, Colorado schools and the CU Science Discovery program. 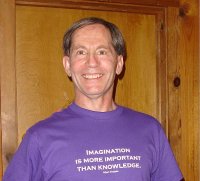