An Interview with Lea Kissner, Software Engineer at Google

Fewer and fewer women are joining the IT field these days — the official statistic is that there’s been a 70 percent decline in the number of undergraduate women choosing to major in Computer Science between 2000 and 2005 — and NCWIT is working to understand why that is and reverse the downward trend.
Working at Google, I’m surrounded by some of the most intelligent and driven people I’ve ever met, so I decided to take advantage of that proximity and sit down with a couple of Google Women Engineers and talk to them about how they first got interested in technology, why they think women are underrepresented in IT, and what advice they would give young women who are interested in computer science. Following is the first of the two interviews: a conversation with Lea Kissner, Software Engineer at Google.

Tell me what do you do for Google.
I’m on the information security team at Google, and I do a combination of things.
I’m a software engineer; I work on infrastructure — making things run, making things work.
And I do security design reviews: people from all over the company e-mail me and say hey, I’m doing this cool new thing, can you tell me how to make it more secure.
I also work on privacy for Google, making sure information is anonymous and secure, and that we’re doing right by our users.

What degrees do you hold?
My undergrad degree is a B.S. in Electrical Engineering & Computer Science from UC Berkeley. And I have a Ph.D from Carnegie Mellon in Computer Science.

What’s a typical day like for you at Google?
I bike in to work (my new bike is under 18 pounds and made of carbon fiber), and then get through all my email. I help people out with their security problems, sometimes have meetings with them. I do some coding.
We work very collaboratively at Google, which is really great. I spend a lot of time with people figuring out what they need, figuring out what they want to do, to make sure what they want is to be secure.

How did you discover that you were interested in security?
I actually used to work in robotics. I did a lot of soldering, and I figured that sooner or later the solder fumes were going to eat my brain, and sooner or later my brain was going to come in handy. So I switched to cryptography because it involves a lot of theory, a lot of math, and it was really fun.
Crypto has lots and lots of really cool math in it. Crypto, security, and privacy have this advantage in that they’re really, really hard.
Partially because no one agrees what it means to be secure, what is means to be private, what math we should be using. And once you verbally agree to a definition of security, how do you write that down in terms of math? And then how do you use algorithms and mathematics to achieve that?

What fascinated you when you young?
Everything. I had the problem that I was interested in everything.
When I was 5 years old, I decided I was going to get my Ph.D. in physics because that was when I was first introduced to liquid nitrogen.
I watched someone drop a rubber ball in liquid nitrogen, fish it out, and throw it on the floor and it shattered, and I thought that is cool! And I thought, if becoming a physicist is what you have to do to get your hands on this stuff, that’s what I’m doing.
I wanted to be a veterinarian for while. And I wanted to be a history major, and I almost majored in history.
But I chose one of the things that I found most enjoyable and most difficult.

What were your favorite books growing up?
There was lots of reading, so that’s a very long list. I read everything that I could get my hands on.
There was one book that I found again recently called Emergence by David R. Palmer — it’s a book about an 11-year-old and her experience when someone sets off a biological weapon and kills most of the people in the U.S.
It turns out that there are some people who are transgenic: they have this mutation from their grandparents, who had gotten pregnant during the 1919 flu epidemic. So this transgenic group of people survives this biological attack and have to put society back together. And the Russians are trying to get them. I loved it.

Did you have anyone who influenced you growing up? Anyone you wanted to model yourself after?
Not really. My parents constantly told me: you could do whatever you want. You’re smart, you know how to do things, you can do whatever you find interesting. You shouldn’t worry what you should be doing. You should be thinking about what’s going to interest you down the line.
The woman that was always held up for me as a role model was Marie Curie. And I thought, great, she worked really hard, she did really interesting things, and she died of radiation poisoning, and I don’t want to do that.

What constitutes geekiness?
I’ve always been very geeky. Geekiness is not just a tech thing. Geekiness as I see it is passion.
Geekiness means you’re smart about something, you really love something, and you work really hard it. I’m really passionate about technology and bike riding.

Why do you think there’s been such a drop in women getting computer science degrees?
I know that not everyone has encountered this, but I’ve run into a lot of people who are very, very annoying about me being in computer science.
I’ve had people inappropriately hit on me, I’ve had people call me “little girl” (not at Google, mind you). I’ve run into a lot of negative things.
It’s interesting, I was part of an honor society at Berkeley, and we looked at the percentage of women who were in this honor society (membership was determined by GPA), and it was much higher than the percentage of women in the computer science program at the time.
What’s probably happening is that unless you’re really determined, and unless you’re really good at it, you’re much more likely to be dissuaded from getting into computer science. So you’re losing women who would be perfectly fine at computer science who may be very good at it, but who are turned off by some rather obnoxious behavior.
They may be turned off by the fact that every time you go places, you’re the representative of all womankind. That means, if someone doesn’t like you, all women are bad at computer science. I’ve run into a fair bit of annoyance from people.
But I’m very stubborn. The drop in computer science degrees for women is probably because it’s not easy.

What advice would you give young women who want to get into computer science?
First I have advice for anybody who wants to do just about anything: take a lot of math.
People who know what’s going on with the math can do everything else.
I have a Ph.D. in an extremely theoretical discipline. I wrote extremely theoretical papers, my math skills are what I had been working on. But when I first came to Google, I worked on really low-level coding infrastructure projects part of the time, and a lot of what’s given me the background to do that is not that I’m a coder — I’m not really a coder — but I have formal reasoning skills, I have the ability to look at things and see what’s happening on a high level.
You can see this in a lot of disciplines that the people who understand what’s going on with the math get to learn what’s going on with everything else — they have a much bigger box of tools to apply to any given situation.
It’s really about finding what you want, finding something that is so cool that you really want to play with it.
It’s not about just learning how to program, or learning about computers. Go and learn about philosophy, go and learn about sociology, go and learn about math — lots and lots of math — and all of these things come together, and they’re all useful.
You may end up working with privacy, in which case, knowing stuff about philosophical disciplines, knowing what things people say in literature are really, really helpful because it tells you a lot about how people think.
In terms of being a woman in computer science, you have to just realize that some people are idiots. And you’re unfortunately going to have to deal with some people being idiots.
When somebody says something stupid, women need to say something about it. I’m hoping that’s something people don’t have to do down the road, but that seems to be something we’re still dealing with.
Ginger Makela is a Social Media Specialist at Google and serves as NCWIT’s pro-bono web strategist. 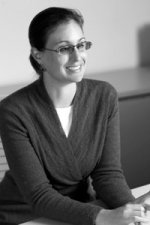