The “Truthiness” about Math and Science

Some of you may have seen the article in today’s NY Times, “Study Compares States’ Math and Science Scores With Other Countries'”, about a recent research report that compares 8th graders’ math and science prowess in the 50 U.S. states against that of 8th graders in other countries.

The report, titled “Chance Favors the Prepared Mind: Mathematics and Science Indicators for Preparing States and Nations,” was produced by the American Institutes for Research. It argues that math and science skills are critical to our global economic competitiveness, and that policy-makers need to know the state of our education pipeline in order to enact reform.

The good news? Apparently even our lowest-performing states do better in math and science than most other countries included in the comparison, besting those such as Norway and Israel. And the bad news? Even the top states like Massachusetts and Connecticut placed way behind our international economic competitors, which include Japan, Singapore, Korea, and China.

Doing better than most countries in math and science might seem good enough, but it isn’t good enough when a few choice countries are doing it better. As the report states, “To meet the demands of the future, a larger proportion of our workforce must have the problem-solving and critical-thinking skills to compete in a technologically sophisticated and global environment.”

The report also mentioned some rather startling statistics about America’s adult population from the National Science Foundation and the National Center for Education Statistics:

Two-thirds of U.S. adults do not understand DNA, “margin of error,” the scientific process, and do not believe in evolution.
Half do not know how long it takes the earth to go around the sun, and a quarter does not even know that the earth goes around the sun.
Half think humans coexisted with dinosaurs and believe antibiotics kill viruses.
Half believe in extrasensory perception and faith healing.
Forty percent believe in haunted houses and demonic possession.
A third believes in lucky numbers, ghosts, telepathy, clairvoyance, astrology, and that UFOs are aliens from space.
A quarter believes in witches and that we can communicate with the dead.
Seventy-eight percent cannot explain how to compute the interest paid on a loan.
Seventy-one percent cannot calculate miles per gallon on a trip.
Fifty-eight percent cannot calculate a 10% tip for a lunch bill.

(I can see how there’s a potential correlation between playing your lucky numbers on the lottery and not being able to calculate the interest on your mortgage.)

Competing globally is important. Growing our population of innovating scientists, engineers, and technologists is critical. Creating a nation of grown-ups who embrace the importance of math and science is fundamental. 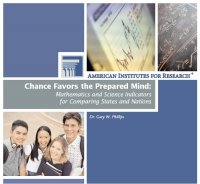