Dr. Mary Lou Soffa, Owen R. Cheatham Professor of Sciences in the Computer Science Department at the University of Virginia, has been named the recipient of the 2020 Harrold and Notkin Research and Graduate Mentoring Award.

Dr. Soffa joined the faculty of the University of Pittsburgh (Pitt) Department of Computer Science after receiving her PhD in Computer Science from Pitt in 1977. In 2004, she accepted a position as Chair of the Department of Computer Science at the University of Virginia (UVA). When her term as Department Chair ended in 2012, she moved into her current position, in which she continues to conduct research and advise graduate students. Dr. Soffa’s current research projects include development of new testing methods for Deep Neural Networks and improving the efficiency of servers used for cloud computing.

A trailblazer from the beginning of her career, Dr. Soffa notes that she was “the only woman faculty member in my department for about 20 years.” To counter the isolation she experienced, she became involved in the Systers network, through which she was able to connect with women in technology at other institutions. “Talking to the members opened my eyes in that I was not the only one who felt they did not belong to the computing community,” Soffa reflects. “We offered information, support, and encouragement to each other, which was invaluable to my career at this point.”

As she began working with graduate students, Dr. Soffa found herself in a position to offer similar forms of support to women students in her own department. Recalling one of her early experiences as a graduate mentor, she says, “I must have been in my second year of being a faculty member and was sitting in my office. There was a very soft knock on my door. A young woman student meekly walked in and profusely apologized for interrupting me. She went on to say that she would like to work with me, but that she was not sure she could do research, and did not know whether I would want to do research with her. Of course, we did work together on research. Two years later, there was a loud knock at my door. The same woman bounded in, so different from the woman of two years ago. She had just accepted a job and was enthusiastic and confident about her career. It was so wonderful to see the change. After she left, I remember sitting back in my chair for a few moments, thinking this is what being a faculty member is all about. I felt I had helped the student make a change in her outlook and life. From that point on, mentoring became an integral and important part of who I am and my research.”

Dr. Soffa’s gifts as a mentor, her commitment to building supportive academic communities, and her deep dedication to supporting her students throughout graduate school and beyond have made a lasting impression on those who have worked with her, both as students and as colleagues. Dr. Lingjia Tang, a former PhD advisee who is now an Assistant Professor of Computer Science and Engineering at the University of Michigan, shares, “During the research process, [Dr. Soffa] showed me the challenge, the fun, and the impact of research. She built the community and the culture around us. She taught us to be not only inquisitive and creative, but also persistent and resilient… Even until this day, when I encounter challenges in research and mentoring, I ask myself, how would Dr. Soffa handle this?”

Dr. Soffa’s colleague at Pitt, Senior Associate Dean and Professor of Computer Science Bruce R. Childers, recalls that she was the first faculty member to welcome him when he joined the faculty in 2000. Working with her on grant proposals and research projects, he learned “how to organize and think about a research agenda,” approaches that he continues to use in every initiative he undertakes. “Most impactfully,” though, he also “saw and experienced first-hand her holistic style and dedication to support individuals, regardless of the issue, the time of day or whatever else was happening.”

One of the ways Dr. Soffa’s impact reached beyond her immediate circle of students and advisees is through her work with the Computing Research Association’s Committee on Widening Participation (CRA-WP), formerly known as the Committee on the Status of Women in Computing Research (CRA-W). In 2004, she co-organized two long-running CRA mentoring programs: the Graduate Cohort Program, which brings together first and second year women graduate students for a two-day event that offers guidance and networking opportunities, and the Early & Mid-Career Mentoring Workshop, which offers distinct tracks for Research, Lab, and Education professionals.

As Dr. Soffa’s colleague at the University of Virginia, Professor of Computer Science Jack Davidson, points out, she has also led efforts at the institutional level to increase the participation of underrepresented groups in computing. “While serving as Dean of Graduate Studies in Arts and Sciences at the University of Pittsburgh,” Dr. Davidson notes, “Mary Lou developed a new mentoring program whose purpose was to recruit and retain African American students to graduate school in sciences and mathematics. At the University of Virginia, she was an integral part of UVA’s Charge Program (funded by NSF’s Advance Program), which has been instrumental in increasing the percentage of women faculty in our STEM departments.”

As her former student, Dr. Tang, explains, “Look carefully, [and] you will find Mary Lou’s influence, especially for women, throughout CS.” Though Dr. Soffa has had an immeasurable influence on students in her field throughout her 42-year teaching career, as she reflected in a 2012 interview, the impact has flowed both ways: “My students are the reason that I love being a faculty member,” she said. “My students have inspired me, driven me in new research directions, taught me, and shared my love for Computer Science… All together, they have brought me joy and a career which I love. I am proud of each and every one.” 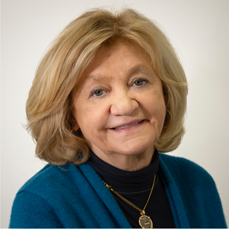