Aimee Lucido is a sophmore at Brown University and a winner of the NCWIT Award for Aspirations in Computing. She also creates crossword puzzles. 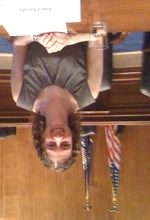