Top 10 Ways to Be a Male Advocate for Technical Women 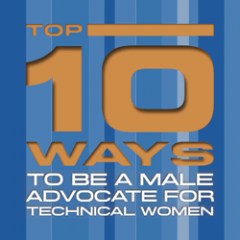 Below are ten ways male advocates say they support technical women and promote diversity efforts in their organizations. Use these ideas to influence your own efforts.

Male advocates in technical workplaces identify listening to their female colleagues' and bosses' stories about their experiences at work as one of the key drivers for their advocacy efforts. The women's stories alerted them to pressures and circumstances they might never have noticed. Let women know that you are interested in hearing their perspective if they are willing to share.

Male supporters say talking to other men is critical. They raise awareness about why gender diversity is important, share what they have learned from women's stories, and intervene privately to correct discriminatory treatment, as needed. They suggest practicing what you might say in difficult conversations.

Because men outnumber women in tech, women must be actively recruited. Inviting female students to apply for internships, requiring hiring committees to interview a certain number of candidates from under-represented groups, and providing promising minority employees with development experiences are just some of the ways men suggest shifting the status quo.

Male advocates recognize that having role models for a diverse range of employees is important for recruitment, retention, employee satisfaction, and productivity. Raise the visibility of female employees and consciously develop more female leaders who can model a range of leadership styles. Provide technical and managerial opportunities, training, and promotions as part of this development.

While female role models are important, women actually benefit greatly from powerful male mentors. These mentoring relationships should be tailored to the individual's needs, but two common suggestions are helping women navigate "hidden rules" in the organization and making technical women's accomplishments more visible in the organization.

Despite our best intentions, we are all subject to biases. When you see instances of unconscious (or conscious) bias in your organization, take action. Some suggestions include restructuring communication channels, moving people's desks or offices, paying attention to who speaks and who is interrupted in meetings, shifting departmental policies, adjusting salary discrepancies, or having one-on-one talks.

As the adage goes, what gets measured gets done. Effective male advocates describe establishing metrics to diversify internship programs, new employee interviews, hires, promotions, and even the make-up of project teams. When you make diversity part of what individuals are evaluated on in performance appraisals or for funding allocations, changes occur.

People in positions of power need to model work-life balance if these practices are to become respected and accepted. Setting aside time to attend family or personal events, publicly utilizing leave policies, and respectfully encouraging employees' alternative or flexible work hours are some ways men suggest doing this.

Sometimes it is easier for men to bring up gender issues because they are unlikely to be perceived as speaking in their own self-interest. Raise diversity topics in meetings; include information in newsletters or in professional development; and coordinate with female colleagues about how to best handle larger group conversations.

Male advocates stressed the importance of requesting invitations to technical women's meetings, participating in women-in-tech groups, and making sure that other men, especially top leadership, attend as well. Men also described the benefits of sending male colleagues to conferences like the Grace Hopper Celebration of Women in Computing.

These practices are derived from 45 in-depth interviews conducted by NCWIT researchers with male corporate employees in technology organizations or departments.

This resource was produced in partnership with the Male Influencer Team of NCWIT's Workforce Alliance.