Kicking Off the Diversity & Innovation Caucus

There is a new U.S. House of Representatives Caucus focused on Diversity and Innovation, something we are quite happy about. In fact, NCWIT had a hand in its formation.

Back in May 2006, along with the National Science Foundation (NSF), we co-hosted a Town Hall on Innovation and the Role of Diversity at the National Academies in Washington, D.C. Our intention was to give voice to the important role diverse thought plays in any creative endeavor and especially in the computing/IT disciplines, where women and under-represented minorities participate in shockingly low numbers.

We had invited Congressman Silvestre Reyes (D-Tx) to moderate a panel, but he was delayed due to important discussions on the Hill and sent a member of his staff, Peter Ambler, to inform us that he could not make it. Despite minimal preparation time, Peter participated on the panel in Representative Reyes’ place, making important contributions to the dialogue. In the process, he also heard from Town Hall participants about the critical importance of attracting members of under-represented groups into STEM disciplines and careers. Apparently he took his impressions of the dialogue back to Congressman Reyes.

Fast forward to June 28th, 2007, the kick-off of the House Caucus on Diversity and Innovation, a bipartisan Caucus led by Representative Silvestre Reyes. Launched at a well-attended luncheon organized by the Society of Women Engineers (with sponsorship from NCWIT, the United Negro College Fund, the National Science Teachers Association, the Society of Mexican American Engineers and Scientists, the Society of Hispanic Professional Engineers, and other organizations), the Caucus plans to generate policy ideas for increasing the participation of groups underrepresented in the fields of science, technology, engineering, and mathematics (STEM).

In his remarks, Congressman Reyes reiterated the importance of diversity to innovation, and the pragmatism of investing in our diverse population, perhaps one of our country’s greatest differentiators. The Caucus currently has 60 members with plans for growth of up to 100 members.

It’s always nice when things work out like this – together, we have made the dialogue about innovation and diverse thought a national one, and I look forward to the ongoing Caucus events and discussions.

Lucy Sanders is CEO and Co-founder of NCWIT, and she knows how to spell caucus. 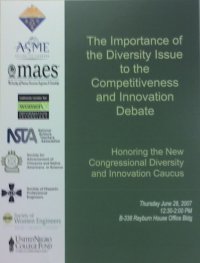