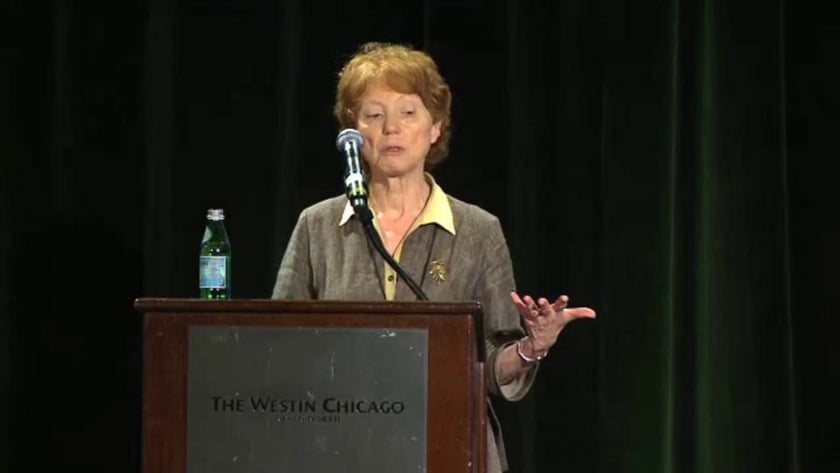 AUDIENCE MEMBER: I just got the microphone, hi.

NORA NEWCOMBE: Oh, there you are, hi.

AUDIENCE MEMBER: Right here. Thank you for a really fascinating sharing of your research. So it’s about this same time, 1989, when one of your first analysis, I think, were on the slides about gender differences and spatial cognition. One of my colleagues at MIT Media Lab ran a study on gender differences and spatial cognition and correlated it to elementary school boys and girls, low income, African Americans and Hispanic kids in their ability to do 3D programming. And I’m bringing this in because I think it really relates to what we are about here. And so what she showed is that indeed where some things that had no differences between boys and girls, but on some test did show a difference. But she also demonstrated, and I know, it was 30 years ago. I don’t really remember the exact details, but she did demonstrate that learning how to program, how to code, it was Logo programming language but also 3D space that she created to program in 3D, actually was a form of training to eliminate the gender differences. And so while we see in your slides this pretty fascinating correlation between people who have strong spatial cognition with their attraction to engineering and computer science, I think that research from back then also demonstrated, her name is Judy Saf-ter. Her research at MIT, her PhD thesis showed that if we will get kids very early on to program, especially 3D programming, we can actually increase not just their engagement in computing and programming but also their spatial cognition that will eventually make them better programmers, which is kind of like what we’re saying. Do you know anything about that research? Did anybody carry on that?

NORA NEWCOMBE: I don’t know about that particular study, and if you could remember the name or send me the reference, I’d love to get it. Part of the work of our center is in fact to come up with a variety of means to improve spatial skills both in little kids and in undergraduates and everything pretty much in between. And we have a lot of good tricks, and, you know, if I had yet another talk to give, I could talk about, you know, just some homely things like play with blocks and do jigsaw puzzles and so on and so forth. But the idea that you get kids to do 3D programming, that’s fascinating, that’s great.

AUDIENCE MEMBER: This is the area that I’m interested in also is the, you’re defining spatial skill as relating to the actual envisioning of objects or molecules or mechanical drawings that represent reality. Is that correct?

AUDIENCE MEMBER: So aside from the use of the number line, you’re not using visual aids to try to model a mental process like programming. So 3D programming aside, I’m interested in the correlation between spatial skills as you define them and the ability to produce programs, computer programs, knowing that frequently the representation of an algorithm is a visual representation. And in my experience of teaching computer science, generally I find I’m a tremendous visual learner. Many of my best students are visual learners. And whether it’s a URL or a flowchart or a data transfer diagram or whatever, a visual representation of an algorithm generally shows the mastery of that algorithm, so the correlation between spatial skills and that ability.

NORA NEWCOMBE: Right. Now that I understand what you’re saying, I think I totally agree. One of the slides that I sometimes show and didn’t show in this presentation actually makes the point that the spatialization of non-spatial information is a very important learning tool. So every time we produce any kind of graph or any kind of flowchart, we can be putting down inherently non-spatial information such as, you know, economic information, how much people earn over time, or this kind of thing, and spatializing it. And it’s often much easier to grasp what’s happening from those kinds of representations than it is from words. I’m actually a great believer in those kinds of data displays. I don’t know much about programming or teaching programming, but I do think that the fact that, in the longitudinal study there was a prediction to computer science, tells us there must be some kind of link of that kind because why else are you getting it? So I would like to know more about the linkage you see in teaching computer science, but yes.

AUDIENCE MEMBER: I enjoyed your talk very much. I actually have a quick comment and a question to follow up. I’m Catherine Di-de-an, and I was actually at the talk that Larry Summers gave. And he had actually three points. One was this is your mathematical ability, and that the fact that young men tested at much higher level, at the higher levels than young women did. But his other two arguments were that women did not want high power jobs because they did not want to work more than 40 hours a week and that there were social and cultural differences that excluded them. But what’s interesting is actually if you look at the data that was presented at that meeting in January 14th, that there, actually, even the women who test high in those levels of mathematical or spatial, roughly less than a third of them go on to computer science and engineering. So actually having that spatial ability and testing well doesn’t necessarily predict you going into the field. And there actually are ethnic and racial differences among certain groups. Like Asians, you won’t see the differences within gender than you do in Caucasians. And sometimes you don’t see them in other ethnic and racial group. So I think this is a very interesting topic, but I think we need to acknowledge that there may be some cultural and social expectations that can influence people even who have that interest that go beyond that. And I just wanted your response to that.

NORA NEWCOMBE: Well, two points. One, just about the Project Talent data. It actually does work in Project Talent when you separate the men from the women. So you find the same kind of threshold effects and the same kind of prediction that you find for women as for men. Now, the more important point that you make, I think, that actually Larry Summers was also making in a somewhat ham-handed fashion, is something that I eluded to at the end when I mentioned work-family conflict. I do think that the threshold that’s posed by spatial skills is really just a kind of threshold or gatekeeper kind of effect. There are other gatekeeper effects that I did not mention, one of which I really believe in although I haven’t personally examined the data, but I think there are data there that women tend to see these disciplines as not helpful and not social. And it’s very important, I think, and you guys probably know more about this than I do, to contextual, you know, if your bridge falls down, people die. This is like socially bad for people or, I’m not quite sure how you do it, but. So there are other gatekeeping factors. In other words, you don’t wanna say that any one factor is the only factor. And, recently, Steve Ceci and Wendy Williams at Cornell have been making the argument that the work-family conflicts are really the key. And I don’t think that’s correct. I think they’re very important, I just don’t think they’re the only thing that’s going on.

AUDIENCE MEMBER: My first impression is, first of all, why is mental rotation important? And when I think about it, I wonder if there’s data and whether or not people who do well on mental rotation, or don’t do well on mental rotation, do well when they’re dealing with the kinesthetic problem. So when they have a 3D thing in their hand, is there data that shows that they do much better with spatial knowledge when they’re working with the model that’s in 3D rather than doing something mentally? And it even made me think of even auditory spatial awareness, thinking of the distance between musical notes or something like that and how those types of things might be different if they were looked at across genders.

NORA NEWCOMBE: Right, right. I don’t know about the auditory part, but people in general do much better at these tests if they do have kinesthetic information. Interestingly, that’s not just because when you turn something, oh, you know, the answer pops out at you. You can give something to somebody to hold in their hand and it’s under the table. So you can’t actually see it. But the fact that you are turning it sort of drives part of the motor cortex of the brain to help you to mentally turn it and to get the correct answer. In fact, when people do these mental rotation problems, in echo MRI setup so we know which bits of their brain are lighting up. You often, although not always, get motor cortex involvement. In fact, the kinesthetic component of doing mental rotation or any other of these mental transformations is actually very important. But the first part of your question, which is why is it important at all? I didn’t go through the many, many correlational studies, I just looked at the Project Talent one because it’s the most impressive because it’s really longterm longitudinal. But there’s a lot of correlational studies that do suggest that it’s correlated with success not only in the STEM disciplines but also, you know, things we might care about in, you know, a different kind of way like being a good dentist or being a good surgeon, or these kinds of things. So yeah, it is correlated.

AUDIENCE MEMBER: Fantastic talk, thank you for it. You didn’t spend much time talking about transfer. As I understand spatial abilities, for a long time we thought you could practice, let’s say Tetris, it would improve your score on Tetris, but it wouldn’t transfer to any other spatial. What was the breakthrough on that and what have we learned about creating transfer from one domain to another from your work?

NORA NEWCOMBE: Well, the breakthrough was… I’m not sure the conclusion that you couldn’t get transfer was ever correct. [laughs] In other words, I think you always could get transfer, there were just some studies that were widely cited that failed to find transfer. In those studies, there are actually reasons for that. In some cases, they didn’t train very much, so it just wasn’t enough training. An interesting reason, which you’ll probably appreciate more than most other people in the audience, has to do with the nature of your control group. So it has to do with what your quote, unquote non-spatial activity is. And it also has to do with how many spatial tests you give as pretest and your post test. Because taking the test itself is a form of training. So it’s hard to get that kind of transfer if what you have to beat is a control group that is also getting training through taking the test. And we actually rigorously show this in our meta-analysis that’s in press. So I think that’s an important methodological point. Retesting effects in this area are actually enormous. A psychologist called Tim Salthouse has compared, psychologists are always worried about retesting effects, and they’re bigger in the spatial domain than in any other domain. So you have to worry about it more there. Okay, well, thank you very much. [audience applauds]