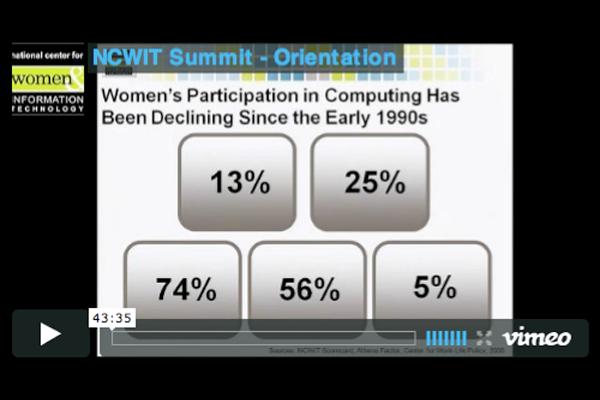 AUDEINCE MEMBER: Do you have any idea about how you’re working to get computer science taught and taught well?

AUDIENCE MEMBER: Sorry, I was hoping you would comment on, briefly, about how you’re working to get computing taught in K-12 and getting it taught well.

LUCY SANDERS: So, I mean, the first thing I wanna say about that is this is a massive community effort. And there are a lot of partners at the table here. So, National Science Foundation cares about this. And they’ve been working in collaboration with the College Board and with a number of educators, K-16 educators, to pilot a new gold standard course in computing called CS Principles. There’s a website up about it. And the way that works, of course, is that, if it’s an AP course, then the universities have to say they’re going to accept it as introductory credit. And there have been some piloting. I think 20… Who knows? 20 pilots so far? I think so. 20 pilots really testing out the concepts of CS Principles and making sure that it’s rigorous, relevant, and inclusive. So, that has to happen first. And then the College Board will eventually move that into a new AP course. So, we think AP is the leverage point here. Now, but that’s not the only thing, because we don’t have… If you were to look at the state of computer science education in K-12 today, it’s pretty depressing at times. I mean, it’s taught as an elective, if it’s taught at all. Sometimes it’s taught as a literacy class and not as a fluency, creative kind of a class. So, we have our work to do to get into the local level, into the schools. And something that Jan Kooney has called CS 10K teachers. We need 10,000 teachers teaching computer science. That’s a goal. And it is an audacious goal of this community. And I’m really proud to be working with that effort, as we all are. And as everybody in this room will need to do as we take this to the local level, ’cause you’ll hear at the DC update, and I think you know it’s true, we can’t solve this issue at the federal level. We have to get more teachers. We have to be out there. We have to advocate in our school districts. We really have to work. And there are some corporations considering putting some major money into this effort, which is great. But we have a lot more work to do. But what’s exciting about it is we’re all pulling the same wagon. It’s great. And so, I’m optimistic. It’s gonna be hard work. But I’m optimistic. Yes?

AUDIENCE MEMBER: In terms of the 10K teachers program, would this work without any state certification for CS teachers?

LUCY SANDERS: Well, now you’re asking a question that’s a little out of my place. I don’t know if we’ve got our CSTA… Is Joe back here? Do I see… No. Do you wanna mention something about that or…

JOE: The certification issues. They’re individual to states. There’s only about 1/3 of states that have any kind of certification at all. There’s all kinds of issues where, in our state, for example, in Wisconsin, we’re trying to adopt the Exploring Computer Science curriculum. And we’re having… I think we’ve passed it finally. But we’re having some major debates on who can even teach the course. Even though there is excellent professional development for that curriculum. There’s people in the DPI that are saying that if it’s gonna be offered in current technical ed, then only business teachers can teach it. Even though, for example, I have a computer science background, I wouldn’t be able to teach that course, potentially, if that thinking were to continue. I think there’s gonna need to be, in each of our states, some kind of a grassroots movement, if you will, to deal with each state’s Department of Public Instruction to rethink that whole notion of certification. At least in relation to computer science. Also to help them understand what computer science really is. That it’s really more than Word and PowerPoint and stuff, which are important skills, but that’s not computer science. So, there’s certification issues that are really a state by state issue. And it is a huge problem.

LUCY SANDERS: Well, I wanna say, again, that we don’t have all the answers for this yet. I mean, there are people who are really… This is their full time job and they’re here. We’ll be talking more about it as we move through this and you’ll continue to hear more. This should be, I think, a project for all of us moving ahead. And there’ll be a lot of moving parts. And there’ll be a lot of things that need to be defined and a lot of hard work. But I feel good that the direction is emerging. And we will definitely have to do it with local advocacy. Yes?

AUDIENCE MEMBER: Does NCWIT have any current data about attrition among academic women in computing and IT? And if there are any programs to address that? The drain, the shrinking pipeline.

LUCY SANDERS: Are you thinking about faculty?

LUCY SANDERS: Faculty. Is Joanne here? I don’t know if she’s here yet. The data. I’m gonna misrepresent this. So, does anybody actually have the facts? ‘Cause I remember that the data is actually not as bad. Is that right? Who knows? Hi Kitty. Good, phew.

KITTY: So, the National Academy did a study a couple years ago called Gender Differences. And we looked at several fields. Computer science specifically wasn’t. But we looked at mathematics and several engineering fields, which have similar patterns, and physics. And what we actually found, in the tenured track and tenured levels, the women who are in those pools actually do quite well. I think the challenge is a lot of those who are in academia are not in those pools. Particularly in R1 institutions. So, you have a lot of contingent faculty. You have a lot of people in other situations. But, for those who are actually in the pipeline for tenure track and tenure, the women are doing actually very well.

LUCY SANDERS: And people have asked us, too, about teaching faculty, as well. So, great question. Who else? Back here.

AUDIENCE MEMBER: I don’t know if this is too out of the box for this organization.

AUDIENCE MEMBER: Being the mother of a teenage daughter, have you thought about approaching the entertainment industry and the magazine industry for the messages that our girls are getting?

LUCY SANDERS: Great question. And you’ll hear me later today when we open the summit to really give a big thank you to Turner Broadcasting, who’s our newest partner, who’s streaming this session live. So, I mean, there are some things that the entertainment industry can do and can’t do. And this is probably a longer conversation. But yes. The entertainment industry’s catching onto this. And I think it’s something that we’ve talked about a long time as a community. But I think it’s happening. They seem to… We’ve been getting calls from the entertainment industry guild and other people. And we’re starting to see that they do care about this. So, yes, the answer’s yes. And please thank Turner Broadcasting people when you see them. Because enlarging our footprint and being able to stream and put this information out more broadly and having them advise us on social media footprint. Very important for us. Very, very important. Anybody have anything else? Yes, please.

AUDIENCE MEMBER: Who foots the bill for all of this?

LUCY SANDERS: Well, you do.

AUDIENCE MEMBER: And how much influence do they have that we wish they didn’t?

LUCY SANDERS: Who foots the bill? Who foots the bill? So, we are, at the moment, funded about half through grants with the National Science Foundation. And the other half through corporate sponsorships. And how much influence do they have that I wish they didn’t? I have to honestly say we have really been fortunate in being able to drive our own boat, by and large. And I think it’s because of the fine work of all of our members. And all of the things that we’re doing that I don’t feel constrained. I feel totally empowered to go do the right thing. Doesn’t mean that I’m not gonna make mistakes. But I do feel like we’ve been really fortunate to have that kind of encouragement and support. And I think it’s because people know we’re building this big community. A movement. And we’re gonna be unstoppable. We’re gonna take over the world. There’s a theme here. Anybody have anything else? Did I answer your question? Good, okay, wonderful. Anything else? Alright, oh, one more? Yes.

AUDIENCE MEMBER: Okay, hi. I understand the meaning of the organization to try and recruit more women into the computer field. That is correct, right? And what about people who are deaf people like me? We’re an even smaller interest group. We’re women and we’re deaf. And so, because deaf women is one of the smallest factions in this whole group of women. And I really want to be able to encourage more girls or women who are deaf to go into the computing field. But what I don’t know is how to deal with the discrimination that men pose on people. Can you explain a little something about that?

LUCY SANDERS: Well, there are a couple of things in response to that. Yes, in fact, we are working for all women in computing. At all levels of the pipeline. And so, this means women who are deaf and other disabilities. I won’t claim that we’re doing a perfect job there. There are other alliances that we partner with, Access Computing, which also works in this space. And we need to do more. But it is part of our mission and part of our charter to work on that. So, we care about all women. And we need to keep vigilant in that space. So, I don’t know what else to say yet about practice and so on and so forth. We did have a joint meeting with Access Computing a few years ago. And it reminds me that, perhaps, we should do something again. So, let’s talk about that. Maybe you have some ideas about what we can be doing that would make sense. That’s a perfect question for why we need our members to come in and say “These are some of the things that I see that you can do as NCWIT that would really be helpful and impactful.” So, we will have some speakers at the summit today talking about the intersection between race and gender. Which is a new conversation for us. So, we’re continuing to move that way, as well. Anybody have anything else? Okay, we have 15 minutes. And then we start the summit. So, thank you for coming. And I look forward to all your joining. [applause] Thank you.