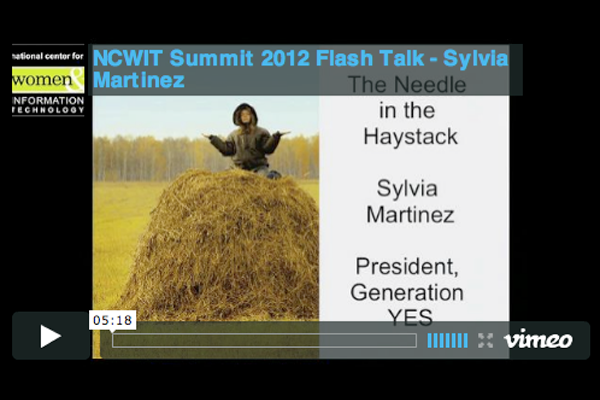 JEFFREY FORBES: Next up is Sylvia Martinez the president of Generation YES who will be speaking about the needle in the haystack.

SYLVIA MARTINEZ: Well thank you. My name is Sylvia and I am a needle. And I know many of you are too. You’re the women in STEM, the ones who made it, we made it in spite of odds against us, we made it to good careers and we’re making a difference. [audience laughter] We made it in spite of discouragement, in spite of some bad advice and obstacles and skepticism, some overt discrimination, so we should be proud. And I know I’m proud, but there were people who helped me. I’m here, I’m an engineer because of an NSF summer camp, so thanks, Jeff. We owe it to those future needles to be role models and mentors, and some of us got lucky and had those experience, and we’re here today to share those experiences. But why are there needles? We know there’s lots of reasons, but I think one reason is the design of the K12 math and science curriculum. We’re weeding kids out, and not just girls. We’re weeding out all kinds of kids; kids who wanna do instead of listen, kids who don’t do well on tests, kids who think different, and kids who are different. These are the problem solvers of the future and we need them on our team. Now some kids we want to help, they’re difficult, they’re confrontational, they reject us, and they can just walk away from our help. In ed psych they call some of these kids oppositionally defiant, but there are a lot of kids who take a much easier route. They do just good enough to get by. Their bodies are present, but their minds are somewhere else. You might even call them oppositionally obedient. So, who’s left? Well, the good kids, the compliant ones. The ones who can sit still for a lecture and do well on tests. [audience laughter] But we end up with kids who can sometimes only ask one question: “Will this be on the test?”, instead of asking the big questions about the universe. And as mentors, we tend to look for those who are most like us, it’s human nature. But we have an obligation to seek all of them out, and to change the system that’s weeding them out. We have to fight for curriculum that’s not based on memorization and tests, where every kid does math and science, not just studies about it. Where there’s opportunities just to build and explore and tinker, like the kids who built this bridge, because that’s the measure of success, not tests or grades. It works, they’re standing on it. I was at the Maker’s Fair on San Monteo this weekend. There were whole families learning together. It was in the air, but a lot of those people have given up on school as a place where learning happens, and that’s just sad. And I am not arguing for dumbing down math or science standards, just the opposite. I think we have to raise our game and raise our expectations, than just hoping we can rescue a few needles out of the haystack, of K12 education. So, let me use a darker metaphor. We all know the story of the Titanic. A terrible tragedy. Poor design, bad luck, pride. Everything that could go wrong did go wrong. But you know what? A few people made it to New York. But, no one claims that we should be building more Titanics, and accept that a lot of the passengers will be at risk on their trip, but in education we accept that argument. We are counting on the educational equipment of better life boats, of doing more lifeboat drills, and teaching raft hanging-on techniques. [light audience laughter] That sounds crazy, but we can’t build a better educated America by counting on needles in a haystack, or luck, or survivors. And to do this, we have to fix this. We have to stop making tiny tweaks in math and science curriculum. We have to teach computing and engineering from this century, from kindergarten on. And we have to call out politicians who are blaming teachers for this problem. We have to change a system that’s based on textbooks and tests, even though they have money and power. We know this system is failing kids. We know our students are losing interest, year after year, the longer they stay in the system. So we have to work with all kids, whether they remind us of ourselves or not, and we have to change the system, both and. Send more lifeboats? Absolutely. Better life boats? Yes. But it’s not enough, rescuing a few needles is not enough. So can we do it? Can we change curriculum, assessment, pedagogy, tradition, culture? Well, yes. We have to. Education is a big ship. It has a lot of inertia, and yes it sounds impossible, and yes it must be done. But, I think we, and I’m looking at you, are just the right people to do it, because we are the needles in the haystack. Thank you very much. [audience applause]