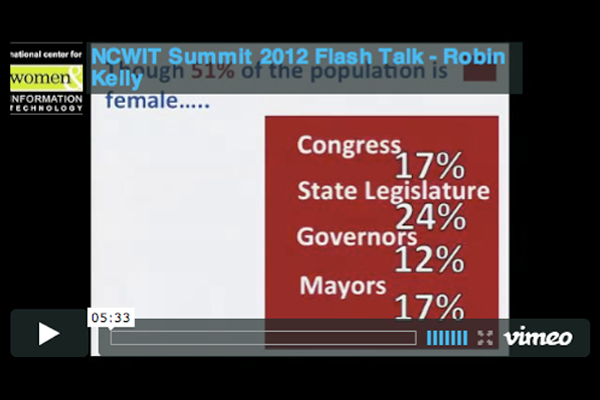 JEFFREY FORBES: Our next speaker is the Honorable Robin Kelly, former Illinois State Representative, and her talk is “Increasing Women’s Leadership: “The 2012 Project.”

ROBIN KELLY: Good afternoon. When you look at this screen you see women. They’re so popular you know them by their first names. Olympia, Hillary, Condi, and Nancy. But don’t be fooled. You know those women but there are not many women onboard to follow behind them. It’s really kind of sad. There’s not enough of us in leadership. And as you can see by that picture there’s not a lot of us in the workplace. And we need to do something about that. And we need to something about it soon because we need more women to make more decisions so the workplace looks like us. United States is rapidly falling behind. We are number 78 as you can see, behind countries you would not think that we would be behind as far as a percentage of women in Congress. Even though we are 51% of the population, and 56% of voters, there’s only 17% of us in Congress and the trend is going downward. There’s only 24% of us in the legislature, and 12% of us as governors. One six out of 50 women are governors in our United States. It’s a lot like your industry actually, because even though there are 56% of women in professional jobs in your industry, on 25% are IT folks, like 24% of women in the state legislature and there’s only 11% that are in executive positions, much like in the governor’s mansion. And why don’t women get ahead in tech and in politics? A big reason is family because no matter how liberated or progressive we think we are, we still carry the burden of family. And we used to joke in the state house, women need more wives and that would help us out a lot. [loud laughter] Also, we don’t have the same confidence. [loud applause] We don’t have the same confidence as men. I don’t know if it’s our DNA and/or cultural bias, and also we are not asked. But when we do step up we step up to take more responsibility and to solve problems and to be change agents and to really make a difference. And we step up because we’re asked. And that’s what I did. I stepped up 10 years ago because I was asked. But it was an opportune time because of remapping that gave me the opportunity to run and I actually beat a 10-year incumbent when I did run. But one of our strategies is The 2012 Project. That’s a project that I represent. With that project we hope to get more women running for office. Why? What do women bring to the table? And not the kitchen table. We solve problems. We use practical approaches. We don’t care who gets the credit or has the authority. We don’t need to be on top. We’re coalition builders and consensus builders. A big example with the Conference of Women Legislatures in Illinois, we’re very diverse. All women, but democrat, republican, liberal, conservative, upstate, downstate, but we got the job done. And we took the 30,000-foot view. We cared about everybody. We were inclusive. We didn’t leave anybody out. We didn’t care about just one group or another. We made sure that there was something for everyone. And that’s what women do as collaborators. Again, you see The 2012 Project, and again, I’m a product of that. I believe in that. I know we need more diverse voices in the legislature. That’s what’s gonna make a difference, not that we’re monolithic. We have different opinions too. But we not only need more women. We need more women that represent diverse fields. You’re voting on 4,000 votes some years and changing policy and we need to have experts in those fields and those fields that you see are underrepresented. When I served a bit ago we had one person representing IT, and actually that was a female. Our strategy in The 2012 Project is to find accomplished women that never thought about running. That was me. I never thought about it. I must admit five men came and asked me to run, but I found out a woman asked them to ask me. [loud laughter] They didn’t admit that at first. We have 70 faculty members that are former legislatures to help us do recruiting to connect us to organizations like yours where we hope we can inspire people to take us up on running for office. We’re also doing public education through television, articles, interviews, to really bring this issue out into the forefront because I don’t think people realize how few women there are. And if women don’t serve and they’re not at the table who loses? We all do. And what can your company’s do? They can educate. They can mentor. They can challenge women, let them know what the opportunities are. And they can create a culture that inspires women to step up to the plate. And also, you can be a role model yourself. You can be it if you can see it. But it’s hard to see if you never see it. It’s hard to be it if you never see it. So I congratulate those women and the women that have made it and we also need to reach back and help other women also. So just remember that you can be a role model yourself. Women don’t run ’cause they’re not asked. Consider yourself asked. If you decide it’s not for you, then please learn more about the issue. Please find other people to run and support them. Volunteer and contribute and again, go to The2012Project.US. Thanks. [loud applause and cheers]