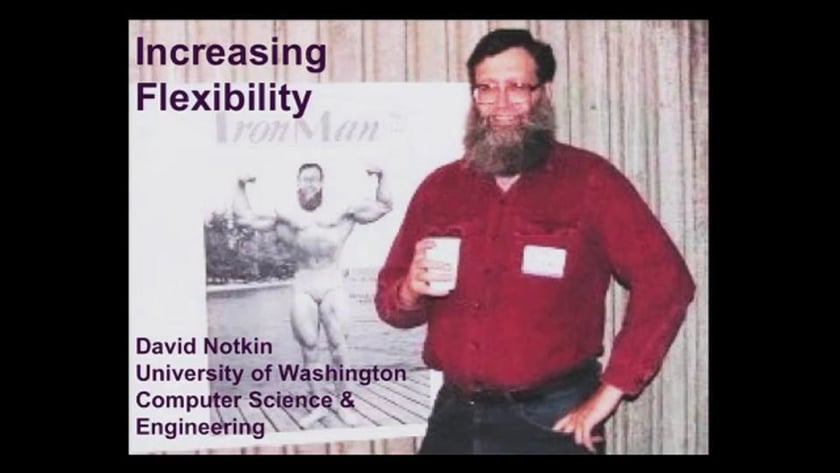 JEFFREY FORBES: So finally, let’s welcome Dr. David Notkin, who’s the Bradley Chair in Computer Science at University of Washington, with a talk on increasing flexibility.

DR. DAVID NOTKIN: So once again, I find myself in a ballroom filled with incredible women with incredible ideas at an NCWIT meeting. I was one of the early chairs of the Academic Alliance, and it’s great to be here with what I hope is a useful but, I’m sure, small idea. Perception matters. As you look, even thinking about these two questions means that you’re thinking about the perception, right? How else could you have a judgment about that? So we have to consider perception as part of our reality, because it is. Three things I’ve learned at NCWIT meetings include the McGurk effect, which says what we hear depends on whether we see or not. Implicit bias says our experience in history affects how to see other people. And all of these feed in to the way we perceive ourselves, and the way others perceive us, and the way that we perceive others perceive us. And so on, I guess it’s an Escher moment of some sort, but these matter. So this is me, this is part of my history. My mom used to ask every friend that came into the house, my sister’s and mine, “What does your father do for a living?” Because she was trying to place some things in a world. She was very nondiscriminatory, but it helped her understand the context. But me, I ended up always in a slice of the pie where people looked mostly like me, right? [audience laughs] I’d never felt lonely, I was rarely in a place of my own, except for my beard maybe stood out for a while. I did practice Aikido for 18 years, and that was a more diverse group. My teacher was a 4’10” Japanese woman, but the tradition was, of course, a Samurai tradition, which was quite male, so it had that. Then I got to the university, and what did I have? I had a class, essentially, of mini-mes. [audience laughs] They looked like me, they thought like me. The only good news was when I told a joke, they all laughed. [audience laughs] Go figure, but that part was good. In 2007, I had come back from a Sabbatical in Sweden. That was great, and it was past some medical difficulties, and I decided to take some Pilates to increase my health, and had a fantastic teacher at the gym right across, a five-minute walk from my office. But I got to that class, and all of a sudden I looked around and it didn’t look like me. It wasn’t only that the teacher didn’t look like me, but the students no longer looked like me. It wasn’t mini-mes, right? That’s a different story. They had different age, weight, sex, probably clear. Center of balance, flexibility, strength. It was really different. I just was, I guess, less female than them. And what I realize is that not only was the atmosphere different from myself, it was different for the class. I remember one time when the teacher was saying, “Okay, class, now everybody pull your weight up under your chest.” And somehow I don’t think that was what she was gonna say, had I not been there. So, I was trying to learn leg circles one day, and I was realizing, who do I look at? Will they see me looking at them? Will they think I’m looking at them, or looking at them? Will they be willing to pair up with me or whatever? So in the Pilates class, I was learning something new, like Maria Klawe suggests. It’s a good thing for people who teach to learn things new once in a while. And that gives you some sense of the other people that you’re teaching. But I realized that I wasn’t only learning something new, I realized that it was the first time that I could consciously remember being a minority in a learning situation. I was there, and I was different, and what I realized was in nearly 30 years at the University, it was the first time I had a glimmer of, maybe, what it meant to be a minority student in our classes, in our labs, and in their careers. And I’d like people to learn that a little bit more quickly, so I want people to loosen their shackles a little bit, have themselves and their colleagues take, find a learning situation where you’re the minority, don’t all do it together, ’cause it won’t work that way, and go out there and see how it feels. Does it change the way you experience the world? Does it change your self image a little bit? How do you absorb the learned information? Do you get to see yourself through other peoples’ eyes? And that’s a useful kind of thing. Of course, every coin has two sides, and I think those of you who are used to learning in a minority situation should probably try and learn in a majority situation, too. That’ll build empathy for teachers in that situation, because it works from all sides. It’s not a straightforward activity. So, in any case, sometimes increasing your flexibility is a little bit scary, a little bit uncomfortable. They’ll give you insights, perhaps, you don’t wanna have. [audience laughs] But it’s worth it, and a special thanks to Jenny, and thanks to all of you and to my colleagues. [audience applauds]