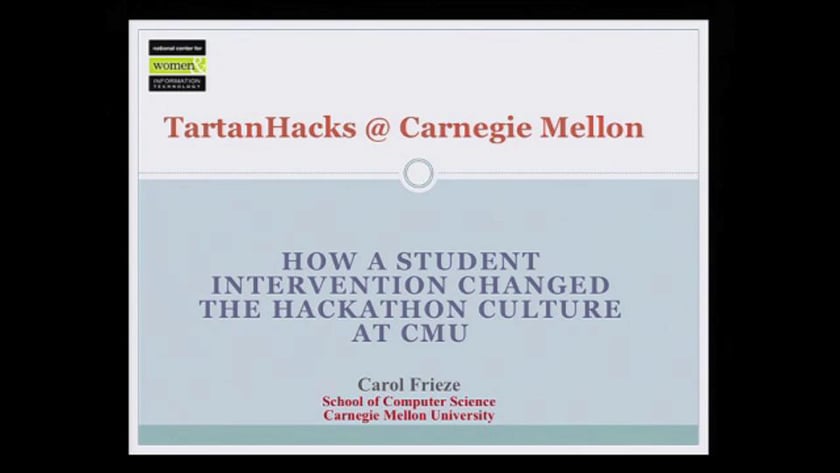 JEFFREY FORBES: So up next we have Doctor Carol Frieze. Doctor Frieze is director of the Women at SCS program for the school of computer science at Carnegie Mellon university. And she’ll be telling us about a student intervention to change hackathon culture.

DR. CAROL FRIEZE: Thank you, Jeff. A few months ago, I actually didn’t even know what a hackathon was. So I’m gonna just tell you, for those who don’t know. A hackathon is a competition in which students work in teams to develop apps, like mobile apps. And they do it in an intensive 24 or 48 hour time period. And at Carnegie Mellon, we have Facebook come and do a hackathon, we have Yahoo come and do a hackathon. In this case, hacking is a very positive kind of experience. Hackathons at Carnegie Mellon, between 70 and 90 students usually participate. It’s not a huge number, but what I hear is, it tends to be the same kind of students every time they do the hackathon. And only between seven and nine students are women in that group. Now this did not go unnoticed among women at SCS, our women, and two students came to me, Amy said and Vinay said, many students are just missing out on these valuable hackathon experiences. We want to run a hackathon that’s more inclusive. We want to run a hackathon that challenges that hardcore hacker image, change the image, includes more women, and the team also includes more first-timers. So they set about developing a plan. And the first part of the plan, of course, was to build a team of organizers and assign roles. They gave me the role of getting sponsors to help with funding, which wasn’t so easy, but nevertheless, we got some great sponsors. And they had to give Tech Talks ahead of the hackathon and then be mentors afterwards. And then they recruited the experienced hackathoners, if there is such a word, who would teach skills to the first-timers before the hackathon and be mentors during the hackathon. And then they advertised all across campus, opening up registration first to women, then to the freshmen, then to sophomores, then to all. So everybody across campus got a chance, but women got a chance first, and so did the freshmen. Here you see the team, team organizers with Amy there, top left, and of course they developed a logo. They used the Carnegie Mellon tartan logo. And they developed their T-shirts, and they’re standing in front of the banner they created. This banner was, again, across campus, and they focused on the creative side of hacking. So it’s a very positive image now, hacking of something that you can be very creative with. Here you see the banner they used, our great sponsors, Twitter, ideeli, Microsoft, Yahoo, Google, Facebook, I feel I should mention them all because they were such terrific help, and partners we also had. And the results were that participation doubled across men and women, but best of all, 25% of the participants were women. So women’s participation tripled. And that was one of the things they were aiming for most of all. Here you see the hackers at work. Off in the corner, you see the team organizers making sure things went smoothly. Some teams were women only, some worked in mixed groups. We fed them well, of course students love to eat. And we fed them often, the traditional subs. But the women insisted they had some healthy food. And of course, everybody in the end enjoyed having the healthy food along side. Now it appears that if you hold events on campus during bad weather, you get more people participating. [audience laughs] And it happened to snow in Pittsburgh that weekend. So that may have contributed to the increase. We had a fire alarm at 3:00 a.m. in the morning, we don’t know what caused it, I wasn’t there at 3:00 a.m. in the morning. And here you see, students went out, here they are on the Randy Pausch Bridge continuing their hacking. 24 hours later, of course, everybody’s totally exhausted. But this is the badge of honor, you’ve completed a hackathon. And this is what they expect to do, it’s just part of that culture. In the end they presented their hacks, all the teams came out and showed their apps. We gave big awards, big money awards, and some little awards like the Tiggers in the top-left corner for effort, they were given for good effort. Next year, 2013, they’re hoping to get more first-timers, more women participants, but one great spinoff was that the female participants from Qatar, who were there this year, will be organizing their own Tartanhacks in Qatar, next year. Thank you. [audience applauds]