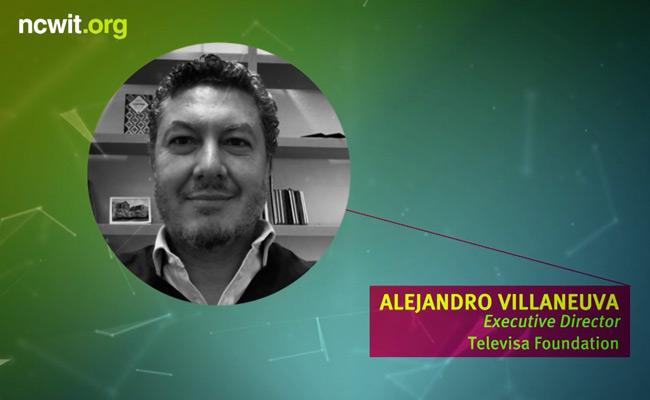 JEFF FORBES: Hi I am really looking forward to this morning here, as you are all hopefully well aware, NCWIT has a history of collaborating and partnering with other change-lead organizations that convene, educate, support, and mobilize advocates of NCWIT’s mission, which is to significantly increase the meaningful participation of girls and women in computing. So one such partnership that has been I think particularly fruitful is with the Televisa Foundation on the production of the TECHNOLOchicas campaign, which aims to empower and aspire Latina girls and women to seek careers in STEM. In here to provide an update on NCWIT TECHNOLOchica Campaign is Alejandro Villanueva. Alejandro is the executive director of the Televisa Foundation, where he oversees programs for Latinos living in the United States. Alejandro holds a master degree in business and has participated in several executive programs from institutions such as Harvard Kennedy School, University of Chicago, Wharton School of Business and Aspen Institute. Kind of hard to get, I mean, he’s doing a lot of education in this into making a big difference as well. In the US, he has been a member of the Board of the Hispanics in Philanthropy and a member of the International Philanthropy Committee at the Council on Foundations. In Mexico, he is a board member of the Mexican Center for Philanthropy and the Paralife Foundation. He is also one of the founders of the Season Network, that promotes a comprehensive reform of the justice system. So please welcome Alejandro to the stage.

NARRATOR: You look at the sky and I think I can’t tell the depth and the fact that I can’t tell how far it goes for the sky, it makes me think how vast can space be.

LATINA WOMAN: Technology has no barriers and you can create whatever you want. It’s like magic, but real.

LATINA WOMAN: I first discovered I like technology, when I took a High School chemistry class.

LATINA WOMAN: Going up as a bilingual kid writing in English was something that was a little bit tough for me, but science and math those were topics that I really could understand.

LATINA WOMAN: Studying technology has given me an idea of how the world works. I feel I’ve been able to understand more how I can make an impact in the world and society around me.

LATINA WOMAN: I’m very excited to do new technologies with my students because I know that they will be the ones to change that technology in the future.

LATINA WOMAN: I wanted to be a part of a community that empowers other young Latinas to create new technology and all these exciting fields.

LATINA WOMAN: Seeing all these great women out there that are similar to myself, the one core thing that brings us together is that we want to help other young Latinas be exposed to science and technology.

LATINA WOMAN: Engineering has been typically the career that we hear about especially for women, but we don’t know that it’s not what you want to do until you try it out.

LATINA WOMAN: IT is super fun. You can make anything happen and all you need is just passion, and we want to learn something that’s new.

LATINA WOMAN: I work at Microsoft as a program manager.

LATINA WOMAN: I work as an English at Qualcomm.

LATINA WOMAN: And I work for NASA JPL on the Mars Curiosity Rover as a Mission Lead.

LATINA WOMAN: If you have the willingness to achieve amazing things, so we created to dream. You are the perfect person for technology.