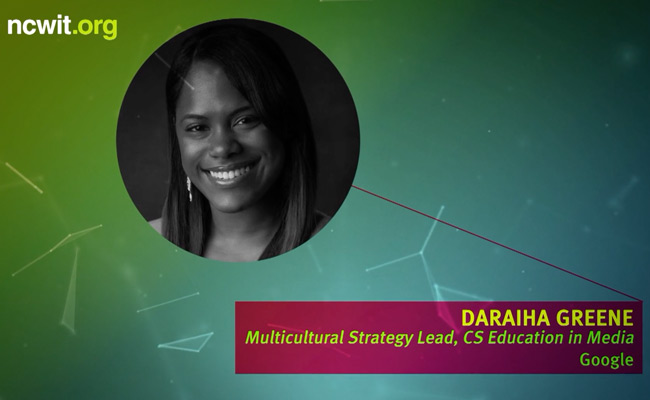 JEFF FORBES: So in 2015, NCWIT in it’s, again longstanding tradition of partnering, partnered with Google and the Geena Davis Institute of Gender in Media, in the formation of the Real Wit Award, to recognize the best portrayals of leading women in any program, who serve as role models for girls and women with computing aspirations, while disrupting the stereotypes of female ingenuity in technology fields. So here to present the award is Daraiha Greene, who’s the multicultural strategy lead for computer science education at Google. C’mon up here.

DARAIHA GREENE: Good morning everyone. I just wanna check in, how’s everyone feeling? Good? Amazing, this resort is so beautiful, I’m just like so blessed to be here, and Margot thank you for those words, you were so amazing and impactful and, just thank you to NCWIT for even hosting us here it’s just incredible. As Jeff mentioned my name is Daraiha Greene and I lead the multicultural strategy… or the computer science and media team at Google. And this team is so near and dear to my heart and I’m so passionate about it because growing up I was actually really good at math and science, but I didn’t feel like I could pursue a career in science, technology, engineering or math because I didn’t see anyone who looked like me doing it, and especially not on TV. So, you’ve probably heard the phrase, “If you can see it you can be it,” right? And that’s what our friend Geena Davis likes to say. The CS and media team strives to do two things: One, get computer science into mainstream media, so that includes TV, movies, digital platforms such as YouTube, the arts, right? And two, ensure that representations of computer scientists onscreen are inclusive of women, people of color, the LGBTQIA+ community, people with unique capabilities, and other underrepresented groups. We know the stereotypes, right, so right now when you see a computer scientist onscreen, he’s usually CIS male, white or asian, acne, those geek glasses, no personality, socially awkward, and it becomes a cycle, right, so to give you some stats, students are five times more likely to take interest in computer science if they often see people like them in the media compared to those who never see people like them. Perception is the #2 reason why girls even want to… To pursue a career in computer science right? They don’t feel like it’s for them, they don’t feel like they can relate. Blacks and Latinos are underrepresented onscreen at 14.1% and 4.9% respectively, and that’s only in general right, nevermind as a computer scientist or a creator of technology. Our team has influenced shows such as The Fosters, Silicon Valley, Miles from Tomorrowland, The Powerpuff Girls, and more to help solve these issues, and bridge these gaps. Recently we joined with Google’s Made with Code team, and other internal Google teams to help bust stereotypes through a partnership with the Oscar nominated film Hidden Figures, and I’m so glad so many of you have seen the film, and if you haven’t I agree that you should absolutely see it, it’s incredible and you will not regret it. So, as Jeff mentioned we co-created the Real Wit Award with NCWIT and the Geena Davis Institute on Gender in Media, to continue championing these fantastic and quite frankly, necessary portrayals. We had an obvious winner this year and it’s our great pleasure to honor the screenwriter of Hidden Figures, Allison Schroeder, and I’d like to play a clip from the film for you right now.

TEACHER: I’ve never seen mind like the one your daughter has.

TEACHER: You have to see… What she becomes.

MARY: Katherine! We’re all gonna end up unemployed ridin’ around in this pile of junk.

KATHERINE: Or sit in the back of the bus.

POLICE OFFICER: You have identification on you?

KATHERINE: We’re just on our way to work.

POLICE OFFICER: I had no idea they hired…

DOROTHY: There’re quite a few women working in the space program.

MAN: You know what we’re doing here? We’re putting a human on top of a missile, shooting him into space and it’s never been done before.

MAN: I need a mathematician that can look beyond the numbers, a man that doesn’t yet exist, before the Russians plant a flag on the damn moon.

WOMAN: You have someone?

DOROTHY: Katherine’s the gal for that, she can handle any numbers you put in front of her.

MARY: That colonel Jim is a tall glass of water.

KATHERINE: And why would he be doing that?

DOROTHY: ‘Cause Mary’s waving at him.

KATHERINE: You already have a slice of pie, don’t…

MR. JOHNSON: You’re a computer at NASA, they let women handle that sorta-

MARY: We go from being our father’s daughters, to our husband’s wives, to our baby’s mothers.

KATHERINE: Was momma gone for 12 and a half days?

DOROTHY: My gals are ready, we can do the work.

JOHN GLENN: What do you ladies do for NASA?

MARY: Engineering, and I’m proud as the devil to be working with you.

KATHERINE: How could you possibly be ogling these white men?

MARY: It’s equal rights, I have the right to see fine in every color.

PAUL: There is no protocol for women attending.

KATHERINE: There’s no protocol for a man circling the earth either.

MARY: Every time we have a chance to get ahead, they move the finish line. Every time.

MAN: We all get there together or we don’t get there at all.

KARL: Let me ask you, if you were a white male, would you wish to be an engineer.

MARY: I wouldn’t have to, I’d already be one.

DARAIHA GREENE: Amazing, I hope that’s the first of many, right? So, Allison couldn’t be here today, she truly wanted to be, and I promise you she has a really valid reason so please keep her in your positive thoughts, but she did record an acceptance video, and I’d like to play that for you now and truly hope that you enjoy it.

[Video] ALLISON SCHROEDER: Thank you, it is such an honor to receive the 2017 Real Wit Award, I’m so sorry I can’t be there in person, it is absolutely possible to have it all as a woman, an amazing career, a wonderful family, a broken tailbone that stubbornly won’t heal, sometimes it just takes the help of some virtual technology. I wanna thank NCWIT for this award, Google, and the Geena Davis institute, it truly is an honor, just as it was to adapt Margot’s book and tell a story of these amazing women. Katherine Johnson, Mary Jackson and Dorothy Vaughan are incredible role models for little girls and little boys, so that they know that no matter their gender or their race, they can grow up to be scientists, mathematicians, and engineers, and programmers. Now, when I was growing up by Cape Canaveral Florida, I knew about these heroes, but a lot of kids today in film see superheroes with capes and gadgets and incredible powers, but these heroes actually did get us to the stars. When we were at Gemini Elementary, they used to time our fire drills so that we could go out and watch the launches, and unfortunately one of my earliest memories was of the Challenger tragedy. Now that taught me very young, the sacrifice that scientists and explorers made for us, to advance humankind, to see things we’ve never seen before, and it’s something I’ve always taken seriously. In 8th grade I was recruited by NASA… Okay probably not “recruited” but that’s what they called it to go study in NASA’s nurture program. And I remember when I was 16 and I showed up and they said, “Put your hands in your pockets everyone.” And we kind of looked around and we put our hands in our pockets, and they said, “Good, because if you touch anything in this room, your parents are going to get a bill of $20,000.” And then they opened the door and there was the shuttle, within touching distance, and I remember the responsibility that they gave us, and I felt so honored that they trusted us, these silly 16 year olds, they believed it enough that we could change the future, that they wanted to share this with us, and I think that’s one of the keys to getting women involved in technology, and that’s start young, because after that moment when I went to Stanford and sometimes guys would tell me to take a slower math class or, like, Janelle Monáe’s character I showed up and the teacher said that he had never taught a woman before and didn’t know how, I was able to stand there and think of NASA and say, “It’ll be fine, you teach me just like a man or I can handle the advanced course,” because I was taught young that I was good enough to be a part of the team and part of NASA. So we truly hope this film has changed the outlook for our little girls, and I think it has, ’cause my friend called me recently from San Francisco, and she was walking down the street with her little girl, and the little girl saw three African American women coming towards her and grabbed her mom’s hand and said, “Mommy mommy look, astronauts!” And if that isn’t progress, I don’t know what is. So for all the little girls and all the children out there like my little girl Emily, I hope they dream big, and I hope that all of you in this room help them dream big, to become the scientists, programmers, engineers, and innovators of the future that I know they can be. Thank you again for this honor.

DARAIHA GREENE: That made me emotional. So, with that I would really like to invite Margot back onstage to accept the award it only seems right, since you all worked so closely. And just thank you to and Allison for all your work.

DARAIHA GREENE: Thank you everyone.