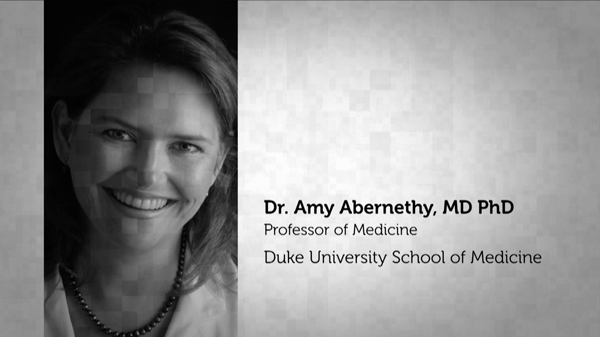 LUCY SANDERS: So now we’re going to move from the future of technology to really honor those who have helped us shape the discipline. And helping me with that we have one other Aspiration student, Serena Booth, will come on stage with the awards. Serena is an Aspirations Ambassador, you’ll see them here at the summit and they made the awards that we will be giving to our Pioneer Award winners in just a minute. So thank you Serena, coming on stage. Also here to help, Dr. Amy Abernethy, MD. She is just a wonderful person to help us honor these award winners. She is a Professor of Medicine at the Duke University School of Medicine and she is also Chief Medical Officer at Flatiron Health. And she has a great area of research that I find really fascinating around this intersection between patient rights and sort of big data. So sort of clinical informatics, which just sounds absolutely fascinating. Very distinguished researched, 400 papers, probably more by now. [laughs] So in her early life Dr. Abernethy was a software programmer at NASA. So you’ll begin to see the link in just a minute when we honor or our Pioneer Award winners. Dr. Abernethy, welcome to the stage. [audience applauds] [bright music]

SERENA BOOTH: Hi, so in 2012 NCWIT created the Pioneer Award. The goal is to recognize individuals whose lifetime contributions have changed the way we think about women’s participation in the history of computing and technology. The women honored here today helped invent the computing discipline and they forged a trail for all of us here, a trail that has helped us through computing, technology, and all of the use of technology products and services. There are two award winners and I’m delighted to introduce them to you. The first is Dr. Christine Darden and the second is Katherine Johnson. Both are NASA scientists. And I’m particularly honored and inspired to be able to present these awards today, because I got my first taste of computing at Kennedy Space Center. And it was because of that kind of experience at the age of 16 and onwards that I got excited about technology too. And the worlds of Dr. Darden and Katherine Johnson will take us in that direction. So first, let’s meet Dr. Darden. Dr. Christine Darden worked at NASA for nearly 40 years, authoring more than 57 technical papers and articles primarily in the areas of sonic boon prediction, sonic boom minimization, and supersonic wing design. Prior to her work at NASA, Dr. Darden taught math at the college and high school levels. She has a BS in mathematics from Hampton Institute, which is now Hampton University and that’s in Hampton, Virginia. She also has a Master’s in Applied Mathematics from Virginia State College, which is now Virginia State University in Petersburg, Virginia. And also a doctoral degree in mechanical engineering from George Washington University in Washington DC. She holds a Certificate of Advanced Study in Management from Simmons College and that’s in Boston. Now, please welcome Dr. Christine Darden to the stage. [audience applauds] [bright music] Thank you for all you do.

WOMAN: Please accept this award from my generation to yours. [audience applauds]

DR. CHRISTINE DARDEN: Now do I say something? Thank you very much. It is indeed an honor to be here this afternoon to receive this tribute and this award. And when I was talking to some of the NCWIT executives about coming, I said well am I expected to say anything? And she says well you can make a few remarks, yes. So I said well as I thought about it, I said well maybe I should kind of talk a little bit about my background in my remarks. Maybe I should talk about the fact that my daddy told me I had to get a teacher’s certificate when I went off to college. He says I want you to be able to get a job when you graduate. And at that time a black female didn’t have a lot of choices and so that he insisted that I do that. Or perhaps I could tell you that my first assignment when I went to NASA was pretty much a dead end assignment. It didn’t have any growth potential, it didn’t have any promotion potential, and it was sort of upsetting to me. And I actually sat there for a few years before I went to one of my managers about three or four levels above that office and said well why is it when a man comes here with the same background that I have and the same degrees that I have and they get put in an engineering section and I get put in a dead end position with no prospective of moving upward? And he says well nobody ever complained about it before. [audience laughs] I said wow. But in fact to even go back to school I had to fight, because NASA had an excellent graduate program when I went there and they would send you to school, then you could get higher degrees while you worked or sometimes even take off from work and get the degrees. And I actually had to actually fight a little bit to be admitted into that program and be able to earn my PhD from George Washington University in mechanical engineering. But then after I got out of that dead end job and I got into sonic boom minimization, my job was terrific. I was not bored at all. I went to work excited every day about the challenges I would face, about what I would do. I didn’t do the same thing every day. I worked from manipulating mathematical equations to writing them into programs and I mostly programmed in Fortran then. And Fortran it was new, it was beginning in NASA when I went there in the late sixties and early seventies. But then we would use the results of the codes that I wrote to design models. We started out with very small models, we would test those models in the wind tunnel, analyze the data that came outta the wind tunnel, and if it did not match what we thought it should do, we would repeat the cycle. Once we thought we had something that was prosperous, we actually went in to actually predicting the sonic booms in the atmosphere and everything. And then we would write papers and I would give papers all over the country at technical conferences about what we were doing, about our results, about what our plans were. And was able even to give invited papers in Japan, and Greece, and Germany, and England. And so it was just an exciting life to work among my peers all over the world in this research area. And one of the very exciting moments is after about 25 years or so of researching this, I was in Colorado Springs about 12, 13 years ago babysitting a grandchild while my daughter was having surgery, some of the other fellas that I had worked with had taken the theories that we had developed over that time and modified an F5 military aircraft. They had changed the shape of that airplane. They had also taken an airplane that was in its original shape. They then flew both airplanes over the microphones from about 50,000 feet in the atmosphere at about Mach three and measured their signatures. And the signature of the shaped airplane was considerably lower than the basic shape. One of my friends called me from California, which is where the test was in the Mojave Desert, you could hear the shouts of joy from the people in the Mojave Desert and you could hear the shouts of joy from my apartment in Colorado Springs. [audience laughs] It was absolutely terrific. And now we’re hoping that NASA can get the money to build an airplane from scratch integrating the efficiencies of a well-designed, supersonic airplane with an airplane that can have a reduced sonic boom so that it makes business sense for somebody like Gulfstream or Boeing, McDonnell Douglas. And so it’s been a terrific thing. I said I could tell them all of that, but what I really would like to tell the young ladies here is don’t let your dreams be diverted by somebody who says you can’t do this because you’re a young lady. Don’t let them kill your dreams, but make sure you prepare such that when an opportunity comes along you can make your dreams come true and you can have a wonderful life. It’s an exciting area to work in and I’ve never regretted doing what I did, not for one day. Thank you so very much. [audience applauds] Thank you. Should I take this? [audience applauds]

SERENA BOOTH: Wow, see what I mean? Absolutely inspiring. Thank you, Christine. And now Katherine Johnson. Katherine Johnson was not able to travel here today so we’re gonna play a short video so that you can get to know her and get a sense of the kind of person that she is, the trail that she blazed, and her remarkable career. [engine rumbling] [bright music] [old fashioned music]

ED: Today a new moon is in the sky placed in orbit by a Russian rocket.

MALE: Commander Alan B. Shepard was to become the first man sent in a sub-orbital flight. The Mercury Capsule is right on course.

MALE: We have lift off.

SERENA BOOTH: Katherine’s work has clearly impacted the history of US space exploration. She has reminded us of what it means to ask the question why can’t I do that and then make it happen. Accepting the award today on her behalf are her two daughters. Please welcome to the stage Joylette Hylick and Katherine Moore. [audience applauds] Thank you. Thank you. It really is amazing.

WOMAN: Please accept this award from my generation to hers. [audience applauds]

JOYLETTE HYLICK: [sighs] I get filled up every time I see it. Good afternoon. I’m Katherine and this is my sister, Joylette Hylick. Thank you for honoring our mother, Katherine Goble Johnson With the National Center for Women in Technology Pioneer Award. We thank God for still allowing mom to understand and to be aware of today’s fast-paced world. She’s somewhere looking at this right now. You are honoring a woman who will be 97 on August 26th of this year. [audience applauds] A woman who received three honorary degrees after the age of 80. [audience chuckles] Can you imagine her world [audience applauds] in 1953? And now you’re honoring her, thank you. She was one of the women mathematicians hired to be a human computer. You’ve seen the video, read what history is now saying about her, but to her family she’s simply wife of 55 years now, mother, grandmother to six, great grandmother to seven, sister-in-law, aunt, and friend. Loyal to the end. She’s humble, regular, but oh so extraordinary, because even though she is staying in a retirement village with assisted living services, they call her Queen [audience laughs] ’cause she’s still in charge. [audience laughs] Mom would be the first to praise your efforts in encouraging young women in technology fields. She has always encouraged young people to excel, especially in math, because it covers all the areas of learning. Especially girls though, she wanted you to pursue excellence in the sciences. She tutored up into her eighties and always with no fee. Her philosophy was always to have goals, be prepared so that when opportunity came you would be ready. Congratulations to our friend Dr. Christine Darden and the collegiate award winners you are honoring today. We acknowledge you, the National Center for Women in Technology, especially Michelle Leonard and Lucy Sanders. We are sure you will have a very successful summit 2015. Thank you very much. [audience applauds]

SERENA BOOTH: And another round of applause for Dr. Darden and Katherine Johnson. [audience applauds] We thank you.