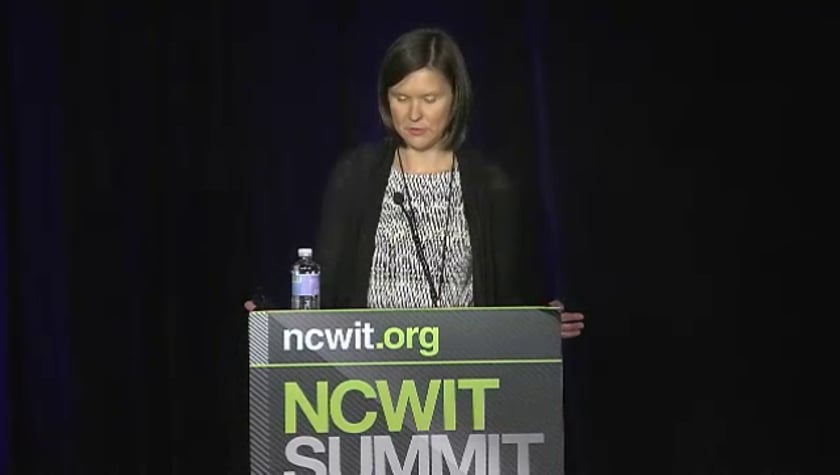 LUCY SANDERS: Alright everybody, we’re gonna get started. Alright, please take your seats, come in from the outside. Get all your friends to come back from workshops. Welcome back everybody, I’m CEO and co-founder of NCWIT, Lucy Sanders, [cheering from crowd] I trust you all had good workshops, yes? [clapping] And welcome back to our remote viewers who are joining us over the livestream. I’m very happy to have you back as well. We have a jam packed hour ahead of us, lots to do. We have special announcements, we have special guests, we have a very special award ceremony. Yay, awards ceremony, Southern California Aspirations in Computing awards ceremony, so with that we’re gonna get right to it. We also have by the way at our Community Reception some very special and playful guests. And you’ll hear more about that after the Aspirations in Computing ceremony, and then we go to our Community Reception. So with that I want to hand it over over to Google, Iveta Brigis, who worked with us quite a while, a senior program manager, and she’s gonna give us just a very quick flash announcement or special announcement about some computer science K-12 research that they did. Please welcome Iveta to the stage. [applause]

IVETA BRIGIS: Can I get a clicker?

IVETA BRIGIS: Hi everyone, how are you? [varied affirmative noises from crowd] And Hai’s picture is up here because he’s the one you can email if you have any questions, all 700 of you, so. Good evening! It’s inspiring to be here with so many people who care about the issues women and girls face in technology careers. Looking around the room, I can’t help but be optimistic that we can solve many of the issues we’re discussing here today. If we work together. Google cares deeply about increasing women’s representation in tech, specifically in computer science. As you heard from Ellen Spurgis yesterday, we have invested in education outreach for many years but we’ve wondered, are we really pulling on the right levers? What are the most impactful things that we should focus on? Have you guys ever asked yourselves those questions? So Google is a data driven company and we use science and data to inform all of our decisions. So in 2013, we decided to take a closer look at the existing research on girls in computer science, and actually many of you have already contributed to this literature and done some great studies. The data showed actually 91 different factors that influence girls to go into C.S. That’s a lot. But we wanted to go the next step and figure out which ones were most influential. So we did something a little unique, which is what I want to tell you about today. We commissioned a large nationwide study to rank the variables that influence young women both in high school and college to have an interest or pursue computer science. And with a large enough sample size, you can actually control for all the other factors. You can read about the methodology when we release the white paper online later this week, so I want to jump right to the findings that I think you’ll find most interesting. First, I think I’m supposed to go… Early outreach matters. 60 percent of the explainable factors that predicted a girl’s decision to go to be interested in C.S. happened before college. Anyone surprised? It’s a pretty big number though. This makes sense because we see that girls are already opting out of computer science as early as high school with only 18 percent of C.S. AP test takers being girls. That means we have to invest in pre-college outreach if we want to effect real change. Second, encouragement and exposure are most critical for developing girls interest. Encouragement and exposure. Is that up there? Yes. More specifically, girls who had a positive perception of the career and understood it’s potential for social impact were much more likely to have an interest in C.S. Pre-college access to computer science in schools and extra-curricular programs were critical to girls developing an interest. So structural opportunities to learn C.S. We actually found that these weren’t as important for boys. So girls needed these structural opportunities. Finally, girls who told us in the study that they were being encouraged towards computer science, particularly by their parents, were significantly more likely to pursue it. So these were the factors that above everything else when we grouped them together came out as most strong. And we also found that some factors didn’t matter. Some of these factors that we’ve often talked about in this community. When you control for all the other factors. So it actually turned out that parents occupation, whether they worked in engineering or C.S., didn’t matter as much as long as they were encouraging their girls. This tells us that you don’t have to be an expert yourself to do the encouraging. And that’s a pretty big finding. Also girls perception of their quality of their C.S. teachers didn’t matter nearly as much as just having the opportunity to try C.S. Kinda like duh when you think about it, but actually pretty powerful. More details of the study are in the white paper, but I wanted to leave you with some ideas for how Google is already starting to implement this, and how you might think about it as well. There we go. Oh, well, we can imagine it. [distant laughter] This is…go forward? Alright. First, we all need to work together to get C.S. into our high schools. Full stop. This is a critical time for giving girls the experience and confidence to pursue C.S., and if you want to have an actual impact on the pipeline where we see changes in the numbers, we have to target high school. I love how Ruth is totally nodding vigorously. [laughter] Second, we must share better stories about what girls can do with C.S. This is really the low hanging fruit. We all know how technology is making the world better, so we need to get those stories out to our girls. And that’s our job. Finally, all our programs should include a parent education component, so that they know how to actively encourage their daughters. Parents who aren’t in tech already need to know that their words and actions can have an impact, and we want them to feel confident in having that conversation with their girls. Hopefully more comfortable than the other conversation you have to have. [laughter] We’re excited about how this research will shape our outreach at Google, and hope you will find value in it as well. I think that if we all work together on the right things, we will be successful in bringing gender equality to the technology industry. And for those who want to read more, you’ll be getting an emailed link to the white paper later this week, going out to all Summit participants. Thank you very much for your time. [applause]

LUCY SANDERS: Thank you, Iveta. I think the finding on encouragement is particularly appropriate for what we’re about ready to do with the Southern California Aspirations in Computing Awards Ceremony. So we’re really looking forward to that, it’s coming right up, and we’re taking advantage, though for just a minute, we’re very thrilled to have Andrea Jung joining us to help with the Aspirations in Computing Ceremony, so we got really greedy and we decided we’d ask her to make, you know, ten minutes of remarks from her perspective about women and empowerment, and technology and inspiration and we’re just thrilled she’s here. Andrea is a corporate executive, as you know, but also a non profit leader, and very much about girls and women and empowerment. Just recently, she was named to be the president and CEO of Grameen America, one of the fastest growing micro-finance organizations in the United States, she serves on the board of Apple, yay Apple, Apple’s a member, and also on Dandler and GE Sports, and prior to that at Avon for a large number of years, and led their effort to secure and distribute one billion dollars worldwide for issues related to girls and women. And so that is the largest I believe corporate philanthropic efforts. So I met Andrea last year and sat down and told her about all the wonderful things that you all are doing as members of MCWIT and she was really blown away, took the opportunity to ask her to come to Aspirations and here she is.