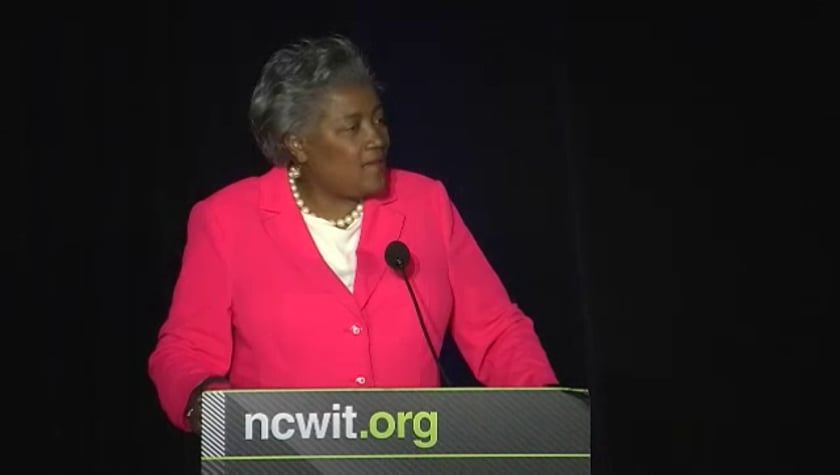 GINGER WANGE: Hello, my name is, is this on? Yes, my name is Ginger Wange, and I’m with PBS Scigirls, and we are the only show on television showing real girls doing real science.

GINGER WANGE: And we wanna tell the computer science story and we need help, but my question to you is, if someone asks why does diversity matter? Why do we need a special show? What do you say to those people?

DONNA BRAZILE: Because diversity increases dialogue. It increases opportunity, it helps expand opportunities for every person. We need it because we don’t acknowledge it, we don’t appreciate it, we don’t celebrate it and we don’t embrace it. And the reason why it matters is because when a kid looks at him or herself and see themselves in the future, they start plannin’ immediately for their lives, for a future, and when they don’t see themselves, they, it’s like any seed, it doesn’t grow, it doesn’t understand how to become who they really are. So it’s about the future, and I know, like I said, I know people get tired of it, I mean, look, I get emails all the time. I get tweets too. Some of ’em I don’t like, I block ’em. [audience laughs] I don’t let no negativity in me. I’m like this is a space, you know, we all got our, you know, you say when you’re born with a little space, it’s called a bubble. And I don’t know about my bubble, but I keep expandin’ it, lotta y’all in my bubble right now. It’s all good. But you know what, people come into your space and say “Well, you know what, we don’t like it, “We don’t,” it’s negativity and when they say you don’t need a show, they don’t know, they don’t understand. Because first of all, it’s gonna increase the number of women and minorities, that’s a good thing, that’s jobs. That’s opportunities, that’s people able to tell their stories. I wanna hear all the stories. I don’t wanna just hear the stories of this person or that group, I wanna hear everybody’s story. It makes us stronger to know the stories, to know who came before, how they got there. What challenges, you know, just two weeks ago I went to President Lincoln’s cottage in Washington, D.C. It’s not far from my house. Who knew that Lincoln had a cottage in the ‘hood? [audience laughs] In the neighborhood. I mean this was not the White House, this was up, up, up, up near Howard University. President Lincoln had a cottage. And I went, and you know just recalling his story, this is a man who started with nothin’, growin’ up in Indiana and Kentucky and Illinois, in rural conditions and it just made me realize how grateful I am to Lincoln and his courage. He grew up, didn’t, never saw anybody look like me, yet came to find the compassion and the love of country to fight, to stand and believe in the freedom of all human beings, a dignity. And readin’ his story, it made me feel stronger. And it makes me realize that we have to all pay it forward. Not get back, we cannot pay the dues of what our parents put into us, or our teachers, or anyone else. We can pay it forward. It’s hard to pay it back. And that’s why you should go in there and make another case for it, you know, and start a little campaign outside the room. Nobody need to know the inside-outside strategy and get a little pressure goin’ and a little sponsorship happenin’ and the love will follow. Open your bubble, okay? All right. Over there? Oh hi.

PAULA STERN: Paula Stern, I’m one of your biggest fans.

DONNA BRAZILE: Honey, I’m one of yours too, thank you.

PAULA STERN: It’s my question was really very much related to the prior question, because I’m conscience now we’ve got this new TV show called Silicon Valley, and so I’m wonderin’ if you would maybe tell us a little more how we get that pressure in Hollywood, to try to insert your message about diversity and inclusiveness in those kinds of images that are so impactful, like this new TV show or some maybe new great film we oughta be putting out. Is there, what more can we do besides making the moral case and the good diversity case about why it’s good for America. How do you convince Hollywood about those kinds of things?

DONNA BRAZILE: Well, you know, I, Paula, in all honesty, I wish it was just Hollywood where we had the problem. Although what magnifies on the screen is much larger, as you all know, than life itself at times. But the truth of the matter is, that visibility is viability, and if all we’re seein’ is the same cast of characters and the same quote unquote cookie cutter kind of folks, we don’t see the diversity and the real strength of our country and, you know, I was thinkin’ when I started, you know, ’cause I know I’m ’bout to tell y’all my personal life here. I’m a big, I love HBO. I can watch HBO all day long and turn on CNN for two hours, go back to HBO and then go back to CNN. I leave my evenings every night, I’m on HBO or Showtime. I love those shows, but when I saw this new Silicon Valley, I’m like, “Okay, really?” It’s such a narrow typecast. And I’m sure, and I was waitin’ for somebody from Silicon Valley, that community itself, the leaders there, to say “Wait a minute, “this is not what we look like. “There’s more diversity.” And as I started readin’ the reviews of the show, and I noticed just a few voices were poppin’ up about whatever. And I’m like, “There’s no outcry.” And part of the problem, Paula, is that there’s no outcry. There’s no outcry in the movies that are made, you know, as you saw from Misrepresentation, the documentary, there’s no outcry. We’ve come to accept the stereotypes, we’ve come to accept the exclusion, thinkin’ that okay, things will change. But it’s not, but we have to, we have to raise our voices. And we have to, as one of the civil rights leaders is doin’ today, and I’m gonna mention his name, Reverend Jesse Jackson is goin’ to all of the so-called corporate board meetings, Silicon Valley, sayin’ “Where is the diversity? “Where are the women on the board? “Where are the CEOs, the CFOs, the COOs? “Where is the board diversity? “Why do we have just 3% of corporate women “on 3% of the corporate boards?” I mean, so we have to raise objection. It shouldn’t just be Reverend Jesse Jackson coming from the civil rights. It should come from every sector of society. From corporations to individuals to organizations and associations, but we the viewers, we also have to put in our three cents. Just like we don’t like demeanin’ portrayals of women, I don’t like demeanin’ portrayal of women of color, I mean I hate to typecast. I don’t watch anything that is desperate. [audience laughs] Just the title Desperate, I don’t do no desperate. I’m not desperate to watch that trash. We have to speak up, and speak out. Because visibility is viability, and our young girls are seein’, and young boys too, and they’re takin’ all kinda cues early on in life from these shows. And the one cue that I can tell you I’ve taken from that show is that I don’t matter, I’m not there. And I’m not at the table, I’m not in the room, I’m not even close by, I don’t even live in the neighborhood. They even go to hamburger joints, and there are no people of color. No women, now y’all know that ain’t right. [audience laughs] How can they go to a beer joint or a hamburger joint and still you don’t see no people. You don’t have no extras? Call me, I got my sad card. [audience laughs] I’ll cameo. By the way, Al Gore, like I said, you know, when you tweet, when you feel good on Facebook, yeah, my ex-boss created all of that good drama. But if he didn’t create it, he sure enough was there to back it when it was being created, so I give him a A plus for bein’ in the room. [audience applauds] Thank you, Paula, for your leadership. Yes, hi, hello again.

SEANICE DESHIELDS: My name is Seanice DeShields, I work for the University of Connecticut, UConn Huskies!

SEANICE DESHIELDS: That’s what we do.

DONNA BRAZILE: What do y’all feed those young people? I’m goin’ come and get some. [audience laughs] Maybe I can go back to playin’ ball too. I got a dribble in me.

SEANICE DESHIELDS: There you go, well, I don’t have a question, I just have a comment, I just wanted to let you know that I really enjoyed your talk and I will be carryin’ my foldin’ chair to every dean’s meeting, faculty staff meeting, and will be there speakin’ up for myself as well as for others, thank you.

DONNA BRAZILE: I appreciate your leadership, my young friend. [audience applauds] Thank you so much, thank you.

DEBORAH KING: Yes, hi there, so I am Deborah King.

DEBORAH KING: And I’m a very proud member of NCWIT’s board, and I think that you are awesome and everybody here is just amazing, and I’m just so thrilled with everything that I’m seeing, so thank you.

DONNA BRAZILE: And thank you for your leadership.

DEBORAH KING: But I wanna say, that something that you said to use Chelsea’s words, pissed me off a little bit.

DEBORAH KING: And so that was the word bossy. So when women are aggressive and proactive and strong, they’re called bossy. And having been called a pushy broad myself, I wanted to know what advice you would give to everybody in the room, when you’re trying to open the door for other women, for yourself and then for other women, and there are all of these unconscious biases in the room, what is the best way to combat that, and not think of ourselves as being bossy and pushy, but think of ourselves as leaders.

MIMI LUFKIN: CEO of the National Alliance for Partnerships in Equity, pleasure. We do a lot of public policy and advocacy work in Washington, D.C. and as a member of the K12 alliance at NCWIT, we’ve been charged today, with a group of us, to talk about how we create a national voice for this issue. You are an amazing political strategist and have done amazing things in your career. If you could give us one word of advice about what maybe would be the first step we should take to get this issue onto the policy stage in a very public way, I’d love to hear what it would be.

LUCY SANDERS: No, no. You have to sit right in this chair, we want your picture.

WOMAN: We have something here? I don’t know if I have this type of red chair. This is good.

LUCY SANDERS: This is the way we’re gonna end our summit, how delightful, right? [audience applauds] And one final comment, we’re gonna ship you a big red chair so that when you go to the White House you can haul that big white chair right in, I mean, red chair in there and go–

DONNA BRAZILE: I need my cellphone.

LUCY SANDERS: That’s, oh no no. You can have mine too.

DONNA BRAZILE: Well, trust me, I have more than one. [audience laughs]