Congratulations to Gladys West—the 2021 recipient of the NCWIT Pioneer in Tech Award!

The NCWIT Pioneer in Tech Award recognizes technical women whose lifetime contributions have significantly impacted the landscape of technological innovation, amplifying the importance of capitalizing on the diverse perspectives that girls and women can bring to the table. Pioneer in Tech Award recipients also serve as role models whose legacies continue to inspire generations of young women to pursue computing and make history in their own right.

The 2021 NCWIT Pioneer in Tech Award is sponsored by Facebook. 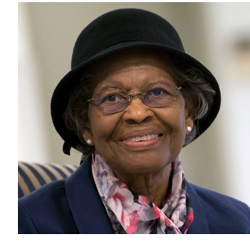 Dr. Gladys West started her career at Naval Proving Ground in Dahlgren, Virginia, now called the Naval Surface Warfare Center, in 1956, and she worked there for 42 years as a mathematician and computer programmer. When she began, she was the second Black woman ever to be hired at the site, and one of only four Black employees total. Inspired by the civil rights movement that was unfolding around her, she countered prejudice within her workplace through hard work and intellectual achievement.

As Forbes reports, Dr. West “specialized in large-scale computer systems and data-processing systems for the analysis of information obtained from satellites. She was the very first person to put together altimeter models of Earth’s shape to significant precision in the 1960s, and served as the project manager for Seasat: the first satellite to perform remote sensing of Earth’s oceans.” Soon after she began working at Dahlgren, Dr. West participated in an astronomical study that proved the regularity of Pluto’s motion relative to Neptune. In a commendation that Dr. West received upon her 2018 induction to the Space and Missiles Pioneers Hall of Fame, this work was described as “path-breaking” and “award-winning.”

The commendation also noted the ways Dr. West’s work laid the foundations for today’s GPS system. From the mid-1970s through the 1980s, the commendation continues, “using complex algorithms to account for variations in gravitational, tidal, and other forces that distort Earth’s shape, [Dr. West] programmed an IBM 7030 ‘Stretch’ computer to deliver increasingly refined calculations for an extremely accurate geodetic Earth model, a geoid, optimized for what ultimately became the Global Positioning System (GPS) orbit.”

Despite her contributions to several high-profile projects, Dr. West remained one of computing history’s “hidden figures” until a member of her sorority realized that she had played a key role in the development of GPS technology, and contacted the press. “You never think that anything you are doing militarily is going to be that exciting,” she reflected in an article in The Guardian. “We never thought about it being transferred to civilian life, so that was a pleasant surprise.”

Dr. West grew up in a rural agricultural community in Dinwiddie County, Virginia. Knowing from a young age that she did not want to work in the fields, she graduated at the top of her class and earned a full scholarship to Virginia State College (now University), where she majored in mathematics. She returned to Virginia State a few years later for her master’s degree in mathematics. While working at Dahlgren, she completed a second master’s degree in public administration from the University of Oklahoma. At age 70, she received a PhD in public administration and policy affairs from Virginia Tech.