It’s rare to find a situation when one issue before Congress can be solved or aided by another issue, but that’s what has happened in recent months.

In the quest to increase the number of women and underrepresented minorities that work in the field of Information Technology, NCWIT has proposed a Military to Civilian Pathways program that would link returning members of the military — many of whom just happen to already have wonderful IT skills learned through their training in the military — with institutions of higher education that could help them obtain a degree in IT. This program would be beneficial for everyone, as it not only addresses the workforce problems of IT, but it also considers the needs of veterans returning from active-duty in the military.

Dr. Paula Stern, NCWIT’s expert on All Things Washington and my boss, and I have been working on how this NCWIT proposal might fit with current legislation that’s already being discussed. A first step for the program went into a bill passed by the U.S. Senate, courtesy of Senator Patty Murray of Washington. We wanted to pursue further, though, the opportunities for this program to succeed, so we started working closely with staff members in Senator Hillary Rodham Clinton’s office. The staff had been working on a GI Bill for the 21st Century that was geared toward increasing the usefulness and accessibility of the original GI Bill for those U.S. veterans who have served since September 11th. The bill is a big step for veterans and includes provisions for education, home loans, and small business loans. Of course, the big part of this for NCWIT was the education, which instead of forcing veterans to pay some money up front, provides eight semesters of funding for tuition, fees, books, room and board, and other educational costs. The money will be paid up front by the government, and therefore will not require the veteran to cover any initial costs.

The rollout was interesting, particularly hearing Senator Clinton speak and meeting her afterward! We also briefly spoke to Representative Patrick Murphy, who is co-sponsoring the bill on the House side. Lastly, it was very moving to hear Joe Washam, Chief Liaison of Government Affairs of Salute America’s Heroes. This young Iraq veteran once tried to use the GI Bill for his own college education, only to discover that he didn’t have the money to pay up front.

NCWIT has also signed on to a Dear Colleague letter that seeks the support of other members of Congress for this bill. If passed, it will enhance the opportunities for so many veterans out there. It also has great potential to increase the IT workforce and to increase the diversity of employees within IT.

By putting to use the 21st Century GI Bill, should some form of it pass in Congress, the veterans entering IT programs will also be advancing NCWIT’s mission and increasing U.S. competitiveness. 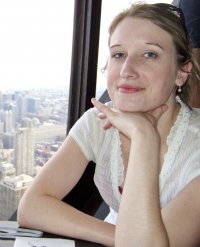